- November 21, 2009
Principle 6: Produce no waste
As discussed in an earlier post, I consider termites to be the greatest threat to the house. I've done further investigation and applied some of my discoveries. I'm not sure how this will proceed through council, but Peter (the architect / builder) sent this letter to council to help address their concerns:


-->Richard Telford chooses NOT to have chemicals in/around his home.

Chemicals for termite prevention remain questionable to health safety, and are not permanent. They require intermittent further applications, and this creates problems.
The Termite Management approach for this house is a visual inspection and physical barrier regime, as provided for in the BCA Part 3.1.3.1. - Acceptable Construction Practice. A clear and permanent NOTICE identifying the termite risk and management requirement is to be placed on the completed building. This location is TBA (Building Inspector may advise).
The Termite Management System includes

With the understanding that termite like certain conditions for habitation, as well as cellulose for food, I have attempted to deter them by not inviting them in or readily feeding them.
The raised slab is the most vulnerable access point in the building. In order to create a clean, clear observation space around the perimeter I filled in all small gaps using motar and silicon and painted the face with a lime/milk wash. A channel was dug around the slab, where it joins the timber floor on stumps; it was filled with wood ash. Both lime and wood ash are alkaline, which termites seem not to like.
I decided to avoid the use of chemical treatments for a number of reasons:
Careful semi-annual inspections are needed to ensure that if subterranean termites enter the building, they will be detected before serious damage is done. Appropriate measures would need to be taken - which could mean chemical baiting. Time to call in the professionals? 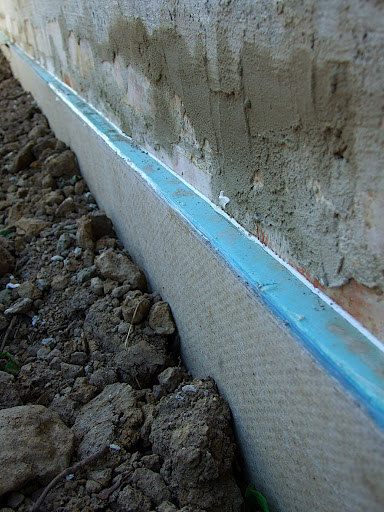 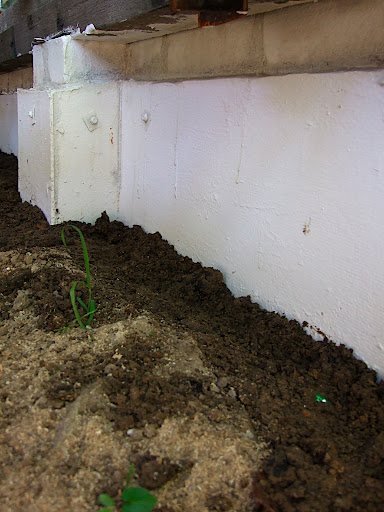 3 coats of limewash (4 parts lime, 3 parts milk) painted over filled gaps in the 75mm inspection zone and slab insulation. The white surface reflects light (termites like dark spaces), seals the surface (termites like moist environments) and will clearly show up any mud tunnels built over it. I have also applied wood ash in a trench around the base of the slab to stump connection as an added deterrent.


Around the part of the house on stumps I have installed 6mm wire mesh, buried 50-75mm into the ground, along with wood ash around the base of the stumps. From a termite perspective this is a good deterrent because it creates a well ventilated, dry environment that is well lit and with alkaline conditions around major access points. While termites could theoretically climb the wire to access the house, I consider this unlikely - they would make themselves vulnerable to attack and don't like those conditions.
An added benefit the mesh is that it is strong enough to deter rodents, snakes and other animals from creating homes under the house, while also stopping leaf material and debris from collecting there (termite food). The 6mm mesh will not prevent small fire embers from passing through (3mm needed), but as there will be no easily combustible material under the house, an underfloor fire is not considered a major threat.
Some negatives using mesh include: 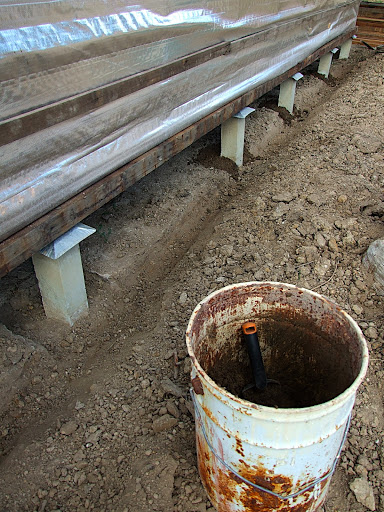 Applying wood ash to the stumps around the perimeter of the building before installing the 6mm mesh. Apparently termites don't like alkaline environments, it is hoped that this application will deter them. 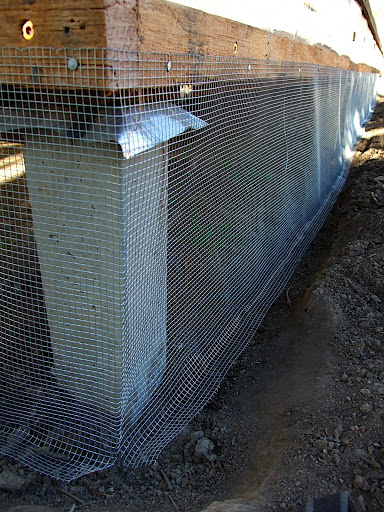 6mm mesh installed and about to be buried 50-75mm underground around the stumped perimeter of the stumped part of the house. The mesh will allow light and airflow in and prevent debris blowing underneath the house. It will deter termites, rodents and snakes as well as reduce fire risk.

Gina said…
How about a big sign that says "No Termites Allowed"? (Just kidding!)

Good luck with your creative solution, Richard! Do keep us posted; I have friends in Mexico with a termite problem.
November 21, 2009 at 10:00 AM

termite Australia said…
Great Information. Termites are quite a nuisance even in our area. Conventional methods are good to a certain extent but then one has to be creative and surprise them at times to get rid of them for a longer duration of time.
September 13, 2010 at 10:47 PM