Before I decided to buy the house in Seymour I was involved with a group of people interested in collectively buying the "Town and Country Hotel" which was erected in 1865 as the "Canadian Hotel". The original verandah was removed and replaced in 1939, giving it an art deco feel. It backs onto the gorgeous Goulburn River, with its magestic Red Gums and walking track. We were interested in transforming it into a community / local food / restaurant type venture. 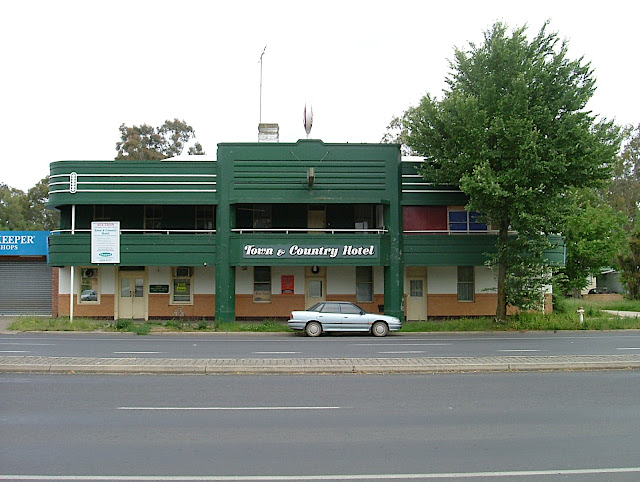 We managed to make it to the auction, but unfortunately (or fortunately?) it sold for more than we were prepared to pay for it at the time. It was purchases by a local entrepreneur who demolished it with the intention of building a new venue. This never happened, presumably because of planning issues and the fact that it's on a flood overlay. The site has since become a rural supply store. 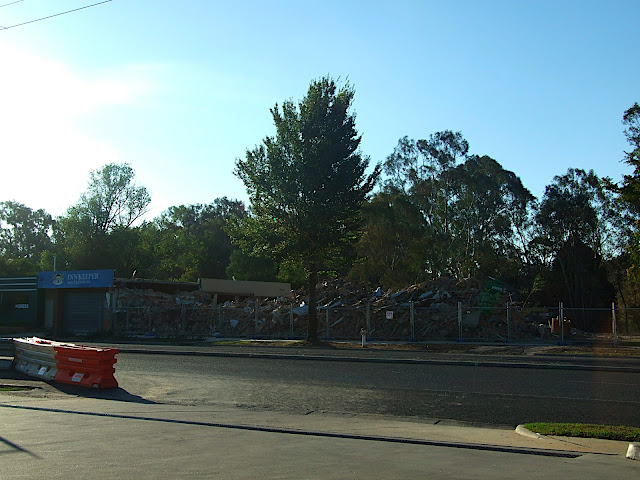 
While missing out on the opportunity to transform this amazing building into a great venue was disappointing, the tragedy is that the historic hotel was smashed up, and all of the material wasted. The same thing happened when the magnificent old priests' house, across the road, was smashed up to make way for a McDonalds junk food pen. The town exhibits little in the way of heritage conservation and enhancement - typical of many rural areas.

When I heard about the fate of the old doctors' residence, the grandest house in the most charming plane tree-lined street, my ears pricked up. My friend / builder / architect, Peter Lockyer, objected in the strongest terms to council about proposed demolition and replacement with a chain supermarket (Aldi). He writes:


"Tallarook Street has the charm for a sustainable future grown on a cafe and tourist focus. The Plane trees are a big part, and the scale and character of its buildings is notable. Domestic scale, shopfronts, footpath interest. This is the street (with perhaps Emily Street) that presents the big opportunity for restoring visitor attractiveness to our town. This benefits us economically, and to our own amenity in eating out. A couple of businesses have identified this opportunity. The role of Council in strategic planning is to identify and support the growth of this opportunity.

Few streets or precincts have such heritage merit as Tallarook Street. This is a street undeserving to losing its grandest house, and the neighbouring cottage, and replaced with an ugly carpark and windowless arse-end retail building. This is a pedestrian area first and foremost. This is no place for an ALDI- a car-orientated business that could operate anywhere else.

Tallarook Street is THE link between the old and the new town centres. It is also the link to an attractive and thriving future for visitors and businesses in the passive recreation/entertainment genre. It is a special street demanding some careful consideration."


With regards to the loss of historical buildings the response from council was as follows:


"Although the buildings may have local historical value they are not protected by the Planning Scheme.

The applicant has agreed to the erection of a ‘historical significance plaque’ being erected on site to describe the buildings that used to occupy the site. This has been required as a condition of permit. Subject to such a condition, it is considered that this concern has been addressed."


A token gesture if ever I saw one.

Instead of waiting to see another landmark building get trashed, some friends were keen to capture some of what was to go to waste. The rights to the deconstruction were sold to an out of towner who picked the 'eyes' out of it. Getting permission for the remaining materials was challenging to say the least, very murky water indeed. Access to the site was limited to a day and a half, and only a small proportion of what was worthy of removing was taken off site. Much of the materials used in the building are no longer available, now extinct. Many locals were keen to get a piece of the action too... 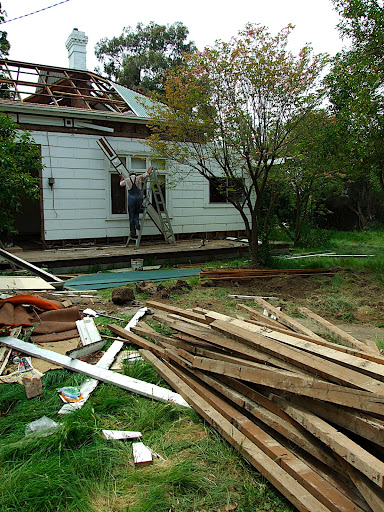 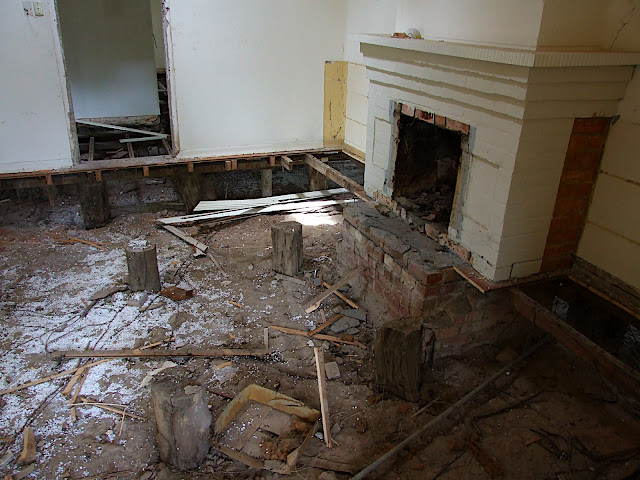 Notice the stumps in the house were actually whole (and part) of logs, fixed directly into the ground, with no ant caps. The building is probably 150 years old, in a termite prone area, with no signs of termite attack - go figure.


Houses like these used to be deconstructed, providing employment and resources for the local community. Now, apparently, it's uneconomic. My friend was telling me that if he had his way, he would start at the top and deconstruct the entire building, leaving a small pile of rubble behind (mainly mortar and plaster) - even taking the stumps for firewood. That is unlikely to happen, legal mumbo jumbo and liability issues bury intelligent resource use and sustainability issues. I'd say some big machines will smash it all up so we will have to make new stuff to replace it - consuming more resources and producing more waste. Very frustrating indeed.

Creatively use and respond to change deconstruction permaculture principle 12

Chris said…
What a tragedy! Councils seem to have no knowledge of keeping the history and beauty of old buildings.
September 6, 2010 at 4:16 AM