Showing posts from October, 2012
Show all

Standing up for renewables

- October 26, 2012
Principle 11: Use edges and value the marginal
The proverb for this principle "don't think you are on the right track just because it is a well-beaten path" seemed appropriate for this post.

As a committee member of BEAM I helped write our submission to council with regards to the planning permit for the Cherry Tree Wind Farm. In our submission we raised some concerns that we felt needed to be addressed, but felt that, in balance "the overall benefits of the project outweigh the negative impacts", and were supportive of the proposal.

At a Special Council Meeting held last night, just 2 days before the conclusion of the council elections (held by postal vote), BEAM was invited along with other people who made submissions to present their case to council. The extraordinary meeting was called as Infigen (the developer) had put their case to VCAT because council had not made a decision on the development with the 60 day time period. I assume that council was forced…
5 comments
Read more 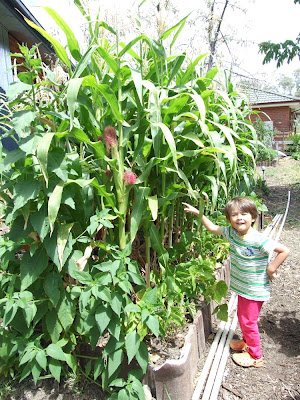 Principle 9: Use small and slow solutions

As an experiment in the garden a couple of years ago I planted some shop bought popcorn (from a bulk foods store) in the front yard. Most of it grew, but it wasn't much good for eating fresh, unless you picked it at just the right time. After it dried on the plant I gave most of it to the chickens. Then I got to thinking that I should try popping it. At first I didn't have much success, with not much of the corn popping. I think this has more to do with my technique than the corn itself, a technique that I have now perfected (the corn just burns if the pot isn't hot enough to pop it).
Our kids often have 'Corn Thins' as a snack, a commercial product made from popped corn. These are often buttered and painted with Vegemite. When you think of how much fat and salt is consumed with each one, popcorn with limited butter and salt is probably a healthier alternative. 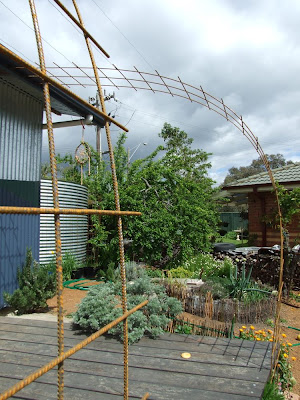 Principle 12: Creatively Use and Respond to change

I've become a big fan of reinforcing mesh (reo) as trellis around the garden. When the mesh is curved it has strength to stand on it's own and support plants. With a small backyard we need to be creative in how we can use vertical space and provide other functions at the same time, like shade.

I've been thinking about how to best shade the decking in summer for quite a while. Peter had suggested sails - but there is a need to remove them during the cooler months, which often doesn't get done, reducing the advantages of passive solar design. I wanted to use deciduous fruiting plants instead, as they perform multiple functions and change with the seasons.
What put me off using mesh earlier on is that I felt that the space would become too enclosed and feel like a prison. Mesh does have an industrial feel to it. I got around this but using three strips of heavy duty reo, running wires between them which will eventually su…
5 comments
Read more 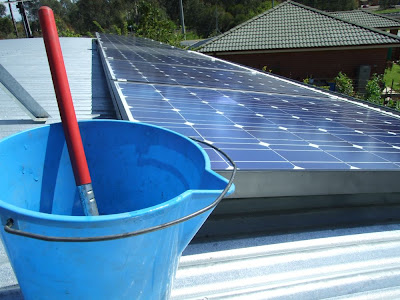 An important element to the principle of produce no waste is regular maintenance. Often maintenance is left too late and requires major work or replacement. If done on a timely basis it's not a big job at all.

The reason I went up onto the roof in the first place was to investigate a bird that was stuck in our chimney. On investigation I discovered that the the bird was stuck at the base of the chimney, not nesting at the top, which was my original thought. When I lifted the flue from the stove top two Indian Myna birds took off and flew about our living room, giving us all a bit of a fright. It had been over two years that we had moved in and this was the first time that this had occurred, I decided to leave the top of the flue uncovered figuring the chance of reoccurence slim.

When on the roof I noticed that the Solar PV Panels needed a clean, so I did so. I decided that this should be part of my 6 monthly maintenance regime, which includes termite …
3 comments
Read more
More posts