Showing posts from 2019
Show all 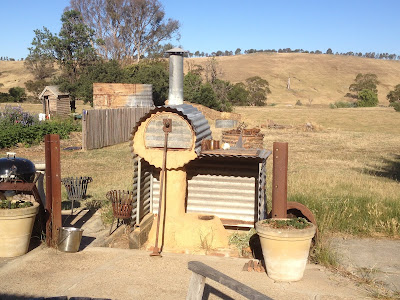 Principle 6: Produce no waste Way back in 2009, while helping clean up a house for a friend, I obtained an old gas oven. My vision was to one day build my own rocket powered oven. I had no idea of how to do that, so the oven sat under a tarp for many years. Then, by chance, in April 2016 I stumbled across a workshop being run by appropriate technology experts Tim Barker and Joel Meadows, while visiting Yandoit Farm . It included a section on how to transform an old gas oven into a rocket powered oven. Of course, I had to do the workshop! We spent the morning learning about what rocket power is, how it works and why its so efficient. In the afternoon we built the oven and had roast veggies from it that night. A 'white' rocket powered oven, built during a previous workshop at Yandoit Farm Inspired by the project, I included a photo of the build in the 2017 permaculture calendar to illustrate the principle ' observe and interact ' to introduce the concept to a
Post a Comment
Read more

Failing to live up to a promise - getting locked out

- January 16, 2019
Principle 1: Observe and Interact When I built the house I used as many second hand materials as I could, but I didn't skimp on the main door locks. I bought that best that I could, a well regarded brand and a relatively simple and common design. The Lockwood 001 Deadlatch came with a 25 year warranty too, so I felt pretty secure in my choice. 8-9 years later and on of the 2 locks that I bought began to fail, the internal knob wouldn't 'hold back', which meant that we started to get locked outside unexpectedly. Remembering that the lock had a 25 year warranty I started investigating how I could get it repaired / replaced. In the fine print I noticed that I needed to provide proof of purchase, and return it to the place of purchase. Being the person that I am I found a receipt that I tucked away, but it had totally faded to the point that I couldn't read it at all, so I couldn't do that. I thought I'd give it a go anyway, because I felt that I was so
Post a Comment
Read more
More posts