Showing posts from November, 2013
Show all

A guide to chicken breeding... from a novice. 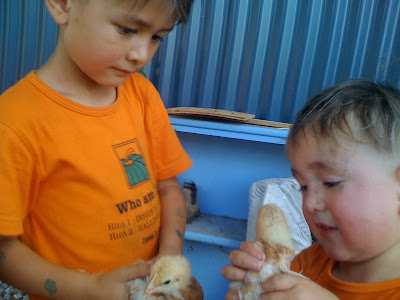 Principle 12: Creatively use and respond to change In March this year we were looking to build up our flock as our egg production was too low. I took the kids to the farm nearby to pick up a couple of point of lay hens and they convinced me to also get a couple of young chicks for them. Kai and Sen with their chicks, Browny and Icku It started to become clear after a few weeks that our new black hen (bottom right) was not a hen at all. The chooks get let out into the garden for limited times - great for when it's time to dig over a bed. One of the point of lay hens turned out to not be a hen at all - but has become a very noisy and overprotective (read aggressive) rooster. Rather than get rid of him I told my closest neighbours of the situation and asked them to let me know if he was becoming a problem for them - and that I'd deal with it. I contacted council to check in regarding the legalities of having a rooster in town, and it appear that this is not an issue.
1 comment
Read more

Principle 12: Creatively use and respond to change While there is still quite a bit of work to do around the house, none of it is that urgent - so my focus has moved to the garden and the local community. My involvement with local environment group BEAM: Mitchell Environment Group has increased somewhat since taking on the presidency role in August. With the VCAT hearing on the Cherry Tree Wind Farm to be decided any day now, I've become the face of the group and appeared on local news channel WIN TV to present some of the benefits of the proposal - for 15 seconds or so. While the Wind Farm may or may not go ahead, one thing that has come out of the 'debate' about the proposal was the people who are for or against it all seem to agree that renewable energy is good and a way for the future. Perhaps just 'not in my backyard'. With that in mind we, as a group, decided to run an event with Yes2Renewables, which we called the Energy Futures Forum. Where some renewab
Post a Comment
Read more
More posts