Showing posts from November, 2011
Show all

The longest pelmet ever? 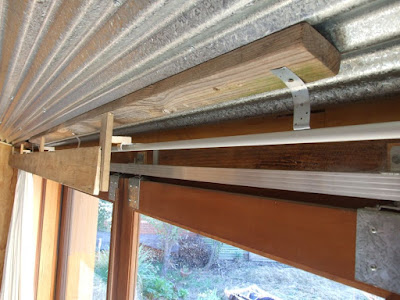 Design Principle 2: Catch and store energy I spent quite a few months thinking about the best way to build a 7m long pelmet, and came up with this approach... Living room pelmet under construction with extra support added to curtain rail to prevent sag The finished pelmet, made with lining boards recovered from the original bungalow, oiled and varnished ...90x45mm pine battens were screwed into the box beams on the ceiling, supporting the structure. 75x19mm pieces of pine were attached at an angle to the battens so that they run vertically and a small chock of wood was added to brace them onto the rail brackets. The weather boards were nailed onto these mini studs. I added some extra support in between the curtain rail brackets using metal bracing off-cuts. I added a plain pine cornice and oiled and varnished the lot, so that it ties in with the rest of the room. The diagram below shows how the pelmet prevents convection currents in winter, during summer our eaves do most o
4 comments
Read more 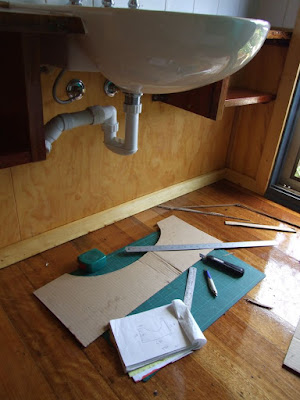 Principle 7: Design from patterns to details There have been a bunch of jobs that I've been working on while the family have been in Japan visiting family. The types of things that I can live without doing, but haunt me every time I walk past them. The details. The bathroom sink cover plate was quite a task, though a relatively small one. I tried to find a piece of timber that would cover the plumbing with a natural edge on the bottom. Of course there wasn't one suitable, so I had to make it up, gluing two pieces together. I made up a template to get the shape that I was after and transferred this onto the red gum. Getting the curve to fit below the sink was a bit tricky without the right tools. A band saw would be great, but a drill and some wood files had to do. I attached brackets to the inside and mounted the final piece from the back. It was oiled with linseed and painted with three coats of floor bio varnish so that it matched the rest of the bench. Creating a te
2 comments
Read more
More posts