Showing posts from September, 2009
Show all

Water in the tank 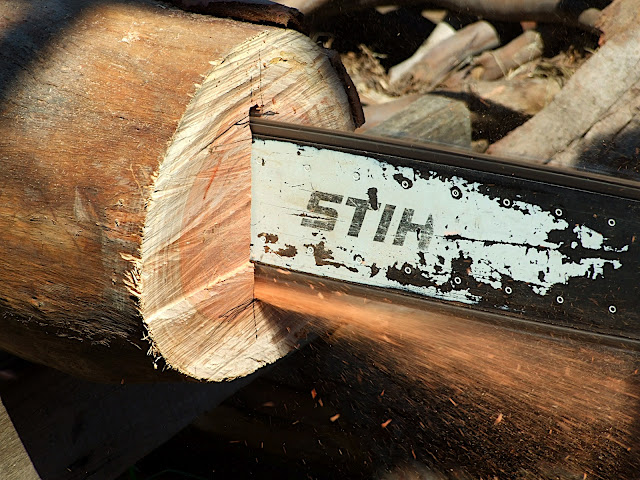 Principle 5: Use and value renewable resources and services Some of the large branches that I put aside from the felling of the red gum found a good home, forming the entranceway to both the garage and front decking. We got a local welder to make up some brakets using old galvanised water pipe from the site, and a metal bar that I'd collected from the brick cleaning . The metal bar slots into both the pipe and the base of the pole, which was cemented into the ground, giving it a stable foundation which was braced from above using box beams. The box beams taper off, giving them a japanese / aussie bush look - just what we were after (my partner is japanese). The post was measured and cut to size, the slot position marked and drilled out with a long 8mm bit. The chainsaw was used to deepen the hole and even it out. After carefully marking the position of the box beam, Peter notches out a slot for it to sit using the chainsaw The tapered box beam in place, with curved box
4 comments
Read more 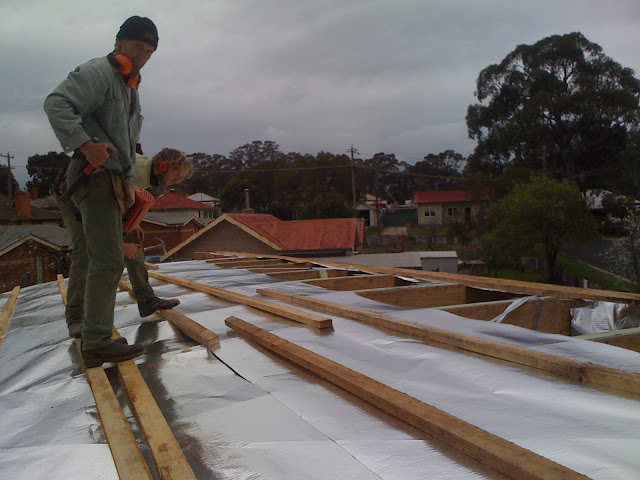 Principle 2: Catch and store energy Now that the frame is basically up we can fit windows and begin wrapping the building with reflective foil. The foil is particularly effective in hot climates offering a radiant barrier which reflects heat back out. The foil does not have an R-value itself, that is only fully achieved by a air space of 25mm between the foil and solid surface, in this case corrugated iron. Locally sourced hardwood battens are used to hold the reflective foil in place, while providing the air gap needed for it to work. A 600mm spacing between battens makes working on the curved roof much easier. Making sure that no sharp edges protrude is very important to ensure that the foil doesn't tear. Here Peter and Quent take the edges off the end of the box beams. Second-hand windows in place, roof and south side of the building wrapped.
Post a Comment
Read more
More posts