Showing posts from February, 2013
Show all

Principle 8: Integrate rather than segregate

Clearly we are not the only people doing this type of thing. I recently discovered this 'linky list' which collects a whole host of blogs that are doing similar types of things as us. If you write a 'Sustainable, Simple, Slow Living Blog' then you might be interested in including your own on there too.

What's in a name? Principle 10: Use and value diversity

I've been asked several times why I named our place Abdallah House. The simple answer is that the house is located on Abdallah Road, and I wanted a name for the house. But there is a bit more to it...

We are located in Seymour, in rural Victoria (Australia). Since settlement the town has a predominately Anglo past, and the name 'Abdallah' is quite unusual for this area. I was attracted to the name to challenge the stereotype of the town as being purely Anglo. Interestingly this is changing and there is a noticeable increase in migrants in the area with the controversial proposal for a mosque on the outskirts of Seymour recently approved by council.

I'm not sure why the road was named Abdallah, but I did discover that on of the early pastoral holdings in the region (from the 1850's), known as 'Glenlyon' was also known as 'Abdallah'. The area is located in the Highlands, about 30km east of Seymour. I suspect that ou…
1 comment
Read more 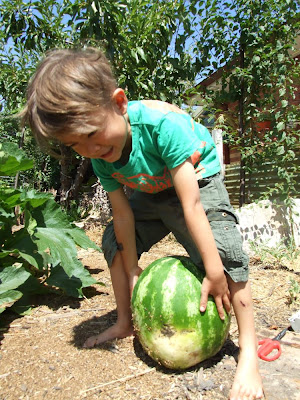 Principle 9: Use small and slow solutions

I was thinking about which principle to use to illustrate this, and decided on use small and slow solutions, I've been realising that home grown food is a fantastic example of this principle. It's also a good example of obtain a yield.

I was given a large watermelon last year by a friend that grew it at the Seymour Community Garden, it was so delicious that I keep some seeds. This year I raised some seedlings and planted a few of them out. One of them took off and eventually produced a single enormous watermelon. It was so big that Kai couldn't lift it (about 8kg).

How did I know when to pick it? Well, I asked around and was told that I should pick it when 'you knock it and it sounds hollow'. I was also warned by another friend not to pick it too early, or too late. Hmmm... well I knocked it, it sounded hollow and I picked it. I was waiting for a time when we were visiting friends because we have no room in our tiny fridge …
2 comments
Read more 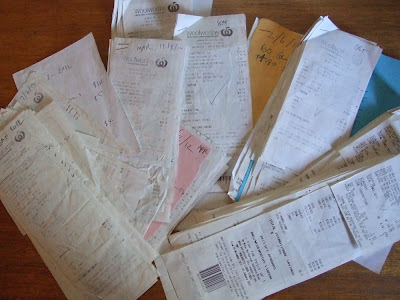 In 2011 we took on the 'Binimum' challenge, successfully only filling one recycle and one rubbish bin for the whole year.

In 2012 we set ourselves another challenge, to record how much we spend on food and drink for the year. We were curious as to how much we actually spend on food that we purchase at the supermarket (and elsewhere), with the idea that we could assess the information and look at where we could make improvements. We also were curious as to how much money we need to generate to live comfortably.

The challenge was a bit of a nightmare actually, 100's of receipts to sort through. I went through the tedious process of recording the details into a ledger into various categories that made sense at the time. Sometimes it was difficult to remember where I categorized certain foods, like rice (processed or seeds?) or brewing concentrate (alcohol or processed?), so the results are not 100% accurate, and we may ha…
Post a Comment
Read more
More posts