- November 26, 2009
Principle 2: Catch and Store Energy
The construction of the cellar has been a long process, and is one of the stand out features of the building. There have been lots of enquiries as to what its purpose is from passers-by.

After the slab was poured for the roof of the cellar we began working on a stairway made from bricks. A wall on either side of the stairs was built up first, which was then filled in with a compacted sand base and mortar to lay each step. The steps were built inside the walls to prevent the walls being pushed inward. Reinforced concrete was then poured into the gap between the outer brick wall and the earth for added support. 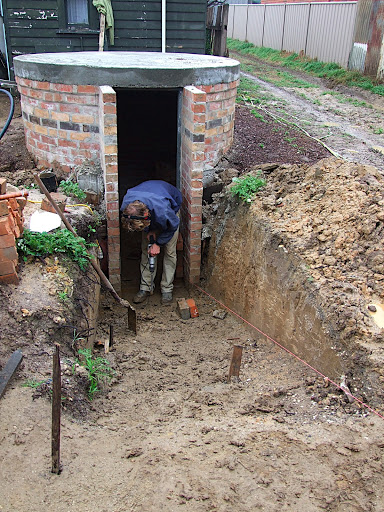 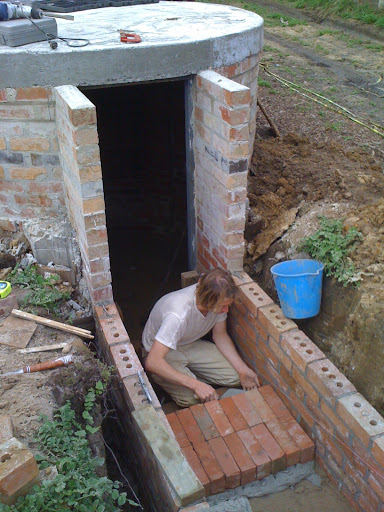 Quentin works on the stairs for the cellar 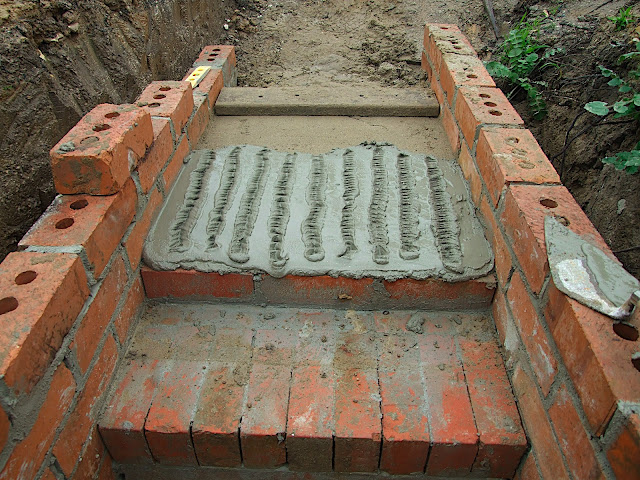 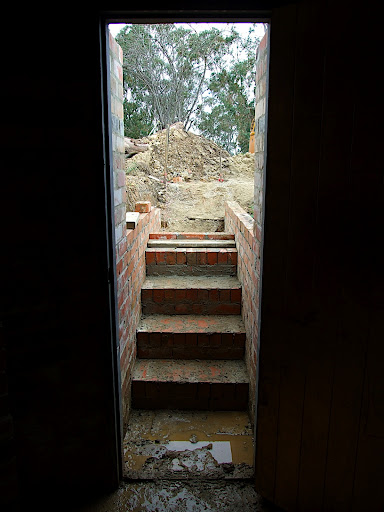 Cellar stairs under construction as viewed from inside 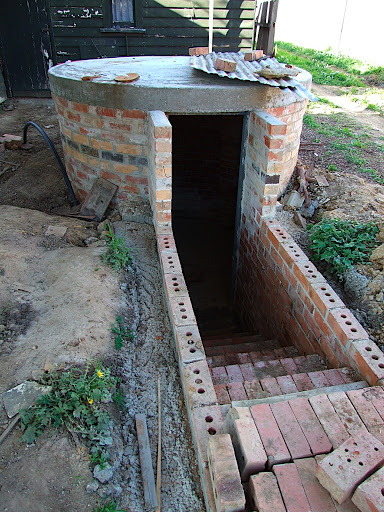 The potential exists for the cellar to be used as a fire bunker / shelter if it was needed, but there are a number of important dangers to consider.
Seven people died in bunkers during the nearby Black Saturday Fires earlier in the year.

While the stairwell was under construction I got a corrugated galvanised water tank made up by local manufacturer, 'Rural Tanks' in Seymour. While the base was a standard size (2m) I wanted to get the tank made to a certain height which was not standard. I also didn't want an outlet installed in the normal postion as the inlet for the tank enters below the normal overflow level. This was no problem for Dave, who charged standard rates for the job.

My plumber, Savva, suggested running the water out the side of the gutter (unusual!) and along the property boundary into the side of the tank to ensure that we could collect as much rainwater as possible. I found some galvanised piping that we set in concrete that will support the pipe and a future fence.

The two water tanks that I now have, a 23,000lt (5000 gal) one and the new 8000lt one can be equalized (same water level in both tanks) using a 40mm pipe that links them. The tanks can also be run independently. By having two separate tanks you can be sure that you always have water available even if one tank becomes contaminated or fails in some way. As per the larger tank this one sits on top of a corrugated iron base which allows for airflow and drainage, prolonging the life of the tank.
Having the 8000lt tank raised allows for gravity feed, avoiding the need for pumping. Water is collected from the roof, stored in the tank and can be used directly for irrigation using 19mm (3/4 inch) hoses. Using thicker than normal (12mm / 1/2 inch) hoses means less restriction and greater flow rates which is important for gravity feed systems. 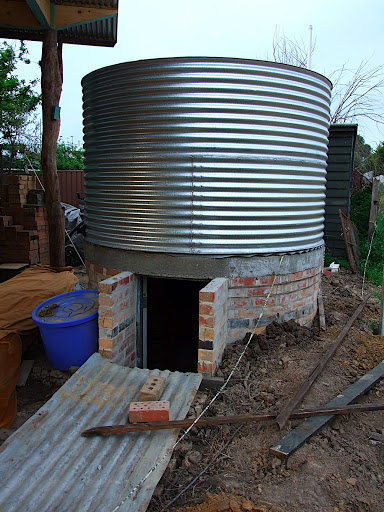 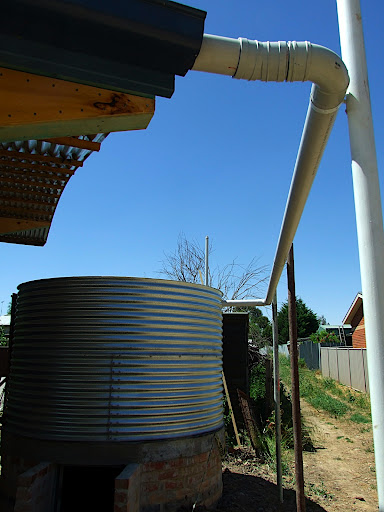 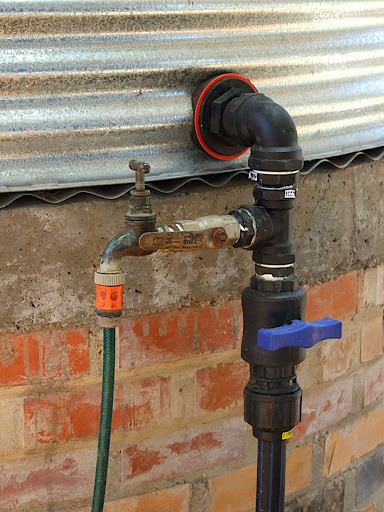 Outlet from cellar tank showing stadard (1/2 inch) tap connection, this will later become a 3/4 inch hose conection for irrigation. The small ball valve to the right of it allows the line to be cut off for repairs to the tap. A large ball valve (1 1/2 inch), which is currently switched off, connects the 8000lt tank to the 23,000lt tank - equalizing them. Having a large ball valve means that there is no restriction in the 40mm line, allowing for good flow rates using gravity feed.

One of the problems that I have come across has been excessive water entering the cellar. Not surprising really since it has been in construction during winter. The main reason why water has been entering the cellar has not been because of water running in from above but because of water coming up from below. A hole was put in the bottom of the sump bucket (thinking it would let water to drain out) which allows water in when the water table rises, but doesn't allow it back out - as there is not enough pressure. It is hoped that by sealing the hole (in drier times) that water will not seep up into the cellar. A small bilge pump will be installed to pump out any excess water in the future. 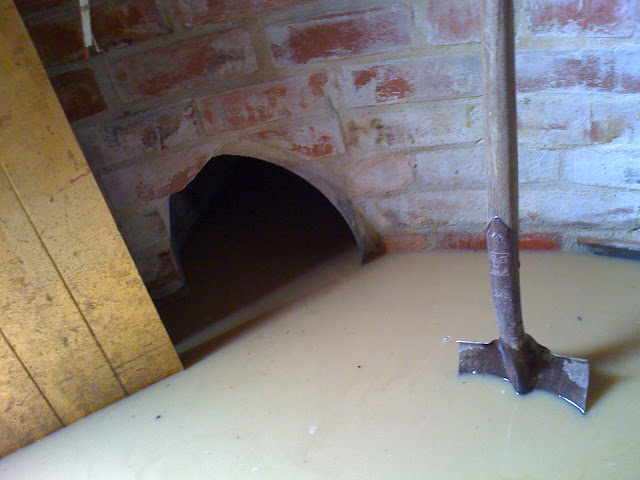 Cellar flooding caused by a hole in the sump (I think) which allows water in when the water table rises. I plan to address this by sealing the sump and installing a sump pump


The air duct from the cellar runs through to the kitchen. We made a metal box up that links the cool tube to the base of the future cool cupboard. While working on the box during a 39 degree day the space was notably cooler, as air was blown throught the tube. The cupboard will later be sealed and have a vent above it that will help draw cool air from within the cellar. Foods will be stored in wire drawers that allow the cool air to flow around them, allowing us to catch the cool air from the earth and store it in the mass of the food in the cupboard, helping preserve it. It will also reduce reliance on and reduce the size of the fridge required. 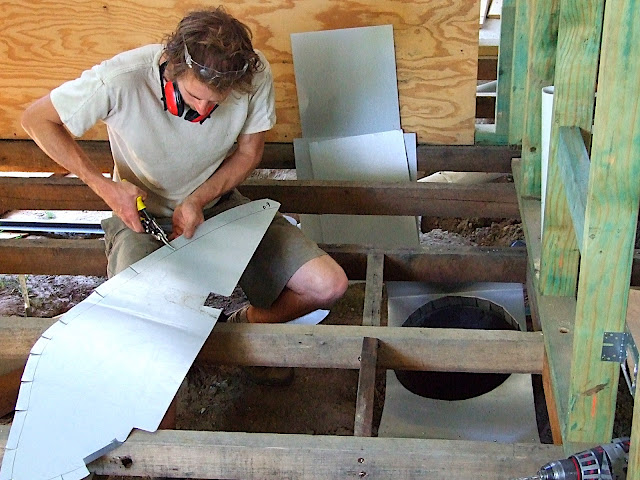 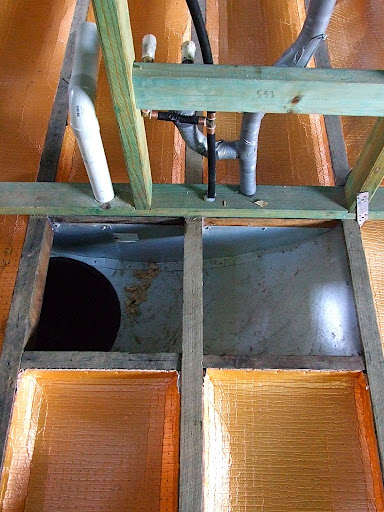 Cool cupboard vent under floor insulation before the installation of floorboards