Ordering the correct quantities of materials on a building site is a real challenge. How much does a cubic metre of sand look like? Experience tells. At A$60 per cubic metre for sand and A$213 for concrete you want to make sure you get your numbers right - or at least close.

All up I used 14 cubic metres of packing sand during this stage and 6.6 cubic metres of concrete. Structural concrete requires a mix of approximately 3 parts stone, 2 parts sand and 1 part cement. Both the sand and river stone were sourced within a couple of kilometres of the house site, not sure about the cement yet, while the supply depot is only 500m away. So transportation costs were kept to a minimum. The reinforcing was sourced from Sheparton, about 75km north.

I've spent about A$10,000 on getting the slab up, including excavations, materials and labour. 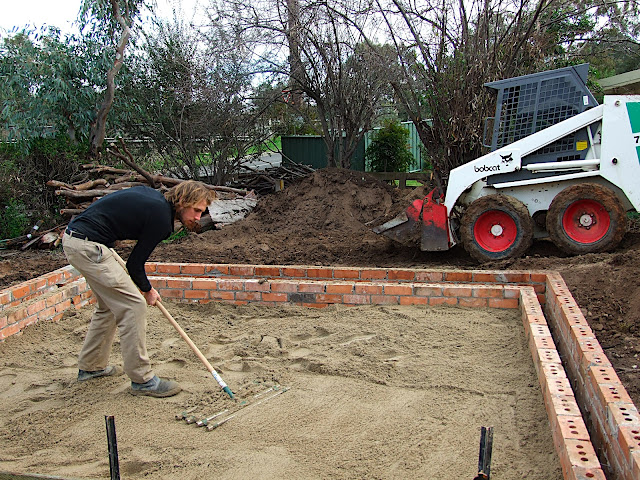 Quentin spreads the first 200mm layer of packing sand. The 'Bobcat' was used to load the sand and is in the process creating a base for a large watertank using excess soil from the excavations, which will give the water a small head which will allow for gravity feed. 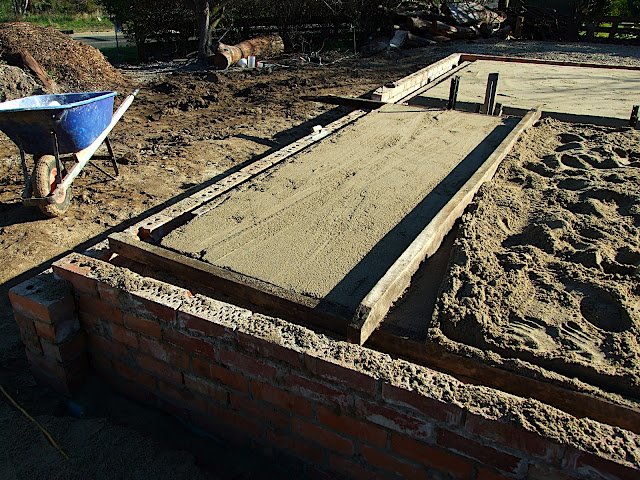 A form was set up with recycled timber so that I could screed the sand to the correct level. 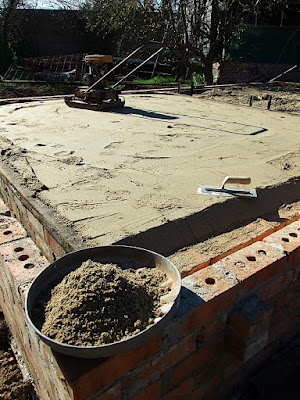 The sand was loaded and leveled in three layers. After each layer it was compressed with a 'whacker'. When the timber form was removed I could shape the sand using a trowel - hours in the sand pit as a kid put to good use. 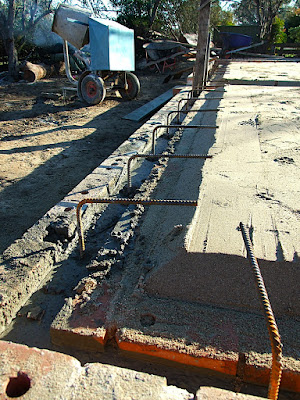 The cavity between the brickwork was then filled with concrete and reinforcing bars set in place before it sets. Structural concrete sets quickly, so you can't muck around to much. Also best to order more concrete than you need, as being caught short can be problematic - as we found out. 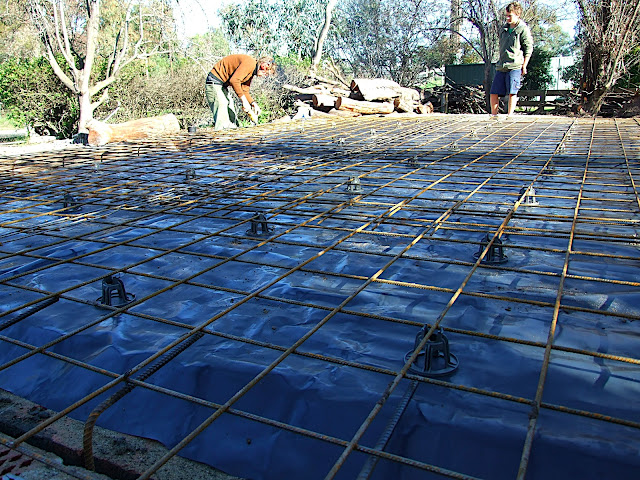 Plastic sheeting covers the sand to act as a moisture barrier and slow the drying time of the concrete, giving it greater strength. Plastic chairs raise the reinforcing mesh to the correct height and wire is used to tie it into place. 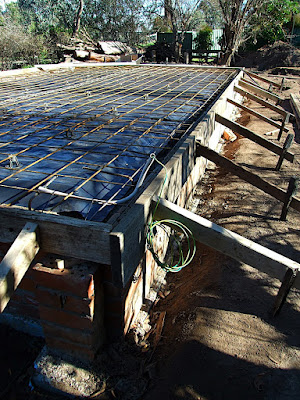 The wire in the foreground was set up by the electrician to earth the reinforcing, so that the plumbing (which is earthed) and slab are both the same - avoiding potential electrical 'tingles' through a wet floor. Formwork was set up to hold the wet concrete in place for the pour. We made sure it was strong and level to avoid problems for the concretor - he was impressed! 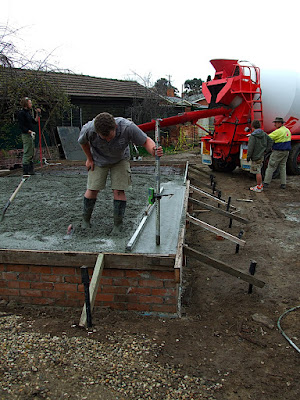 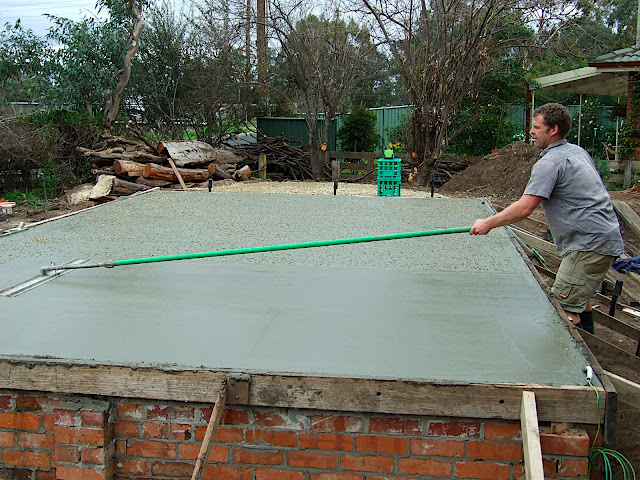 7mm river stones were spread over the wet slab, which will be revealed after it gets cut back and polished. Scott uses a bull float to get a nice smooth finish. 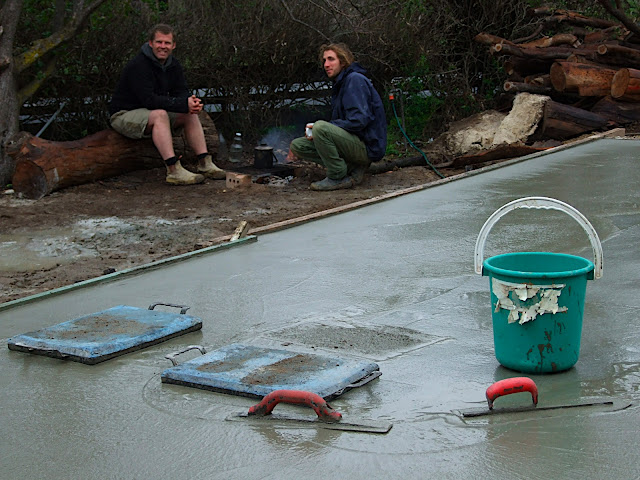 Scott and Quent have a cup of billy tea while they wait for the slab to dry enough to trowel over. Pouring a slab at this time of year (Winter Solstice) is a great way to ensure that your slab dries slowly, you just don't want heavy rains during the first few hours. Fortunately the rain was mild during the pour - a bit nerve-racking all the same. 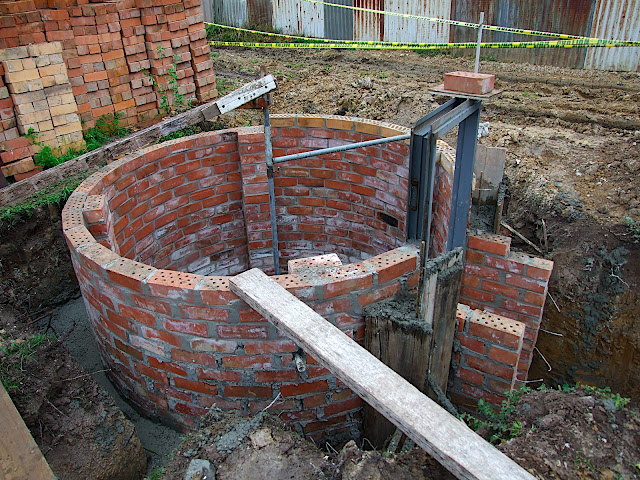 It seems that our calculations were out with the concrete order by about one cubic metre (which is a lot - we played it a bit too safe). We set up some formwork for support columns at the entrance of the cellar for excess (right of pic), but had way more than we needed. So, we used the rest to fill in around the outside of the cellar (left). This will give the structure added strength, while avoiding waste.

Abu Thaabit said…
Ive just finished reading your entire blog, very informative and inspiring, i like your outlook and plan and cant wait to see how it fills out, hayaakumAllah.
August 13, 2009 at 3:00 PM