Excavations Part One: Getting your footings right

It's been a big week, with big machines, lots of people and heaps of money spent.

It's probably easier just running a bit of a photo essay here, with comments below each photo. I've divided this into two sections as there are really two projects going on at the same time. There's the raised slab footings and the cellar with cool cupboard duct. As both projects need the same machines I decided to do them in tandem. I also have had a lot of people working with me during the intensive phase to reduce the workload and potential problems. 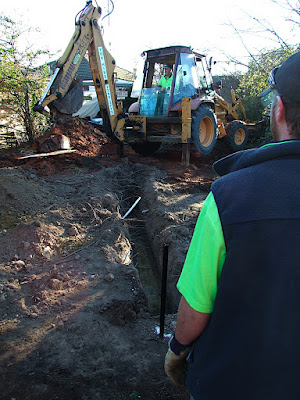 Dave and his son return to dig the trenches for the footings, 300mm wide by a minimum 525mm deep. It's difficult for a big machine like this to work on such a small site; I think Dave did a pretty good job. You can see the telephone cable, and further up the water pipe broken through - I was expecting that. 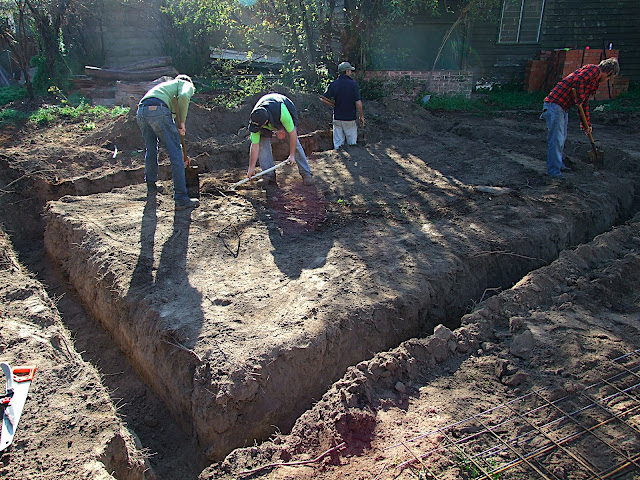 The soil was very dry and crumbly, with many tree roots. So the trenches needed quite a bit of 'tidying up' 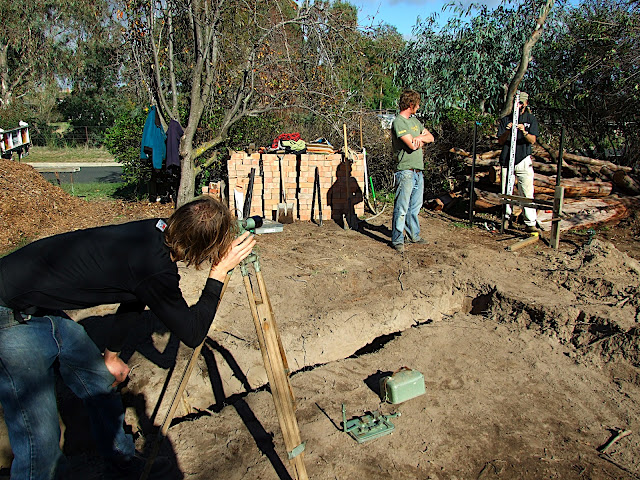 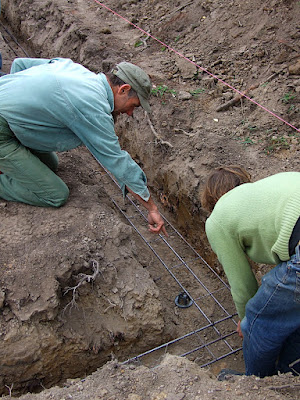 Peter directing Quent in the laying out of reinforcing steel 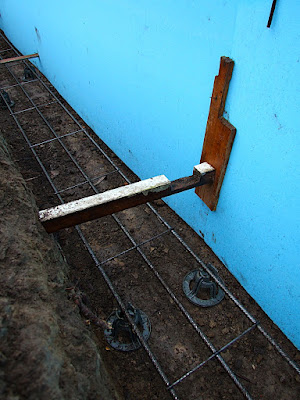 The trenches needed to be enlarged slightly (20mm), so that the insulation could slot into place, and still leave 300mm for the footing. Bits of timber brace it from the inside, which will be removed during the pour. 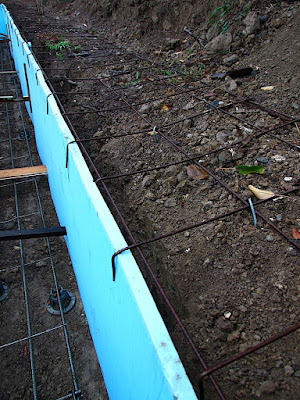 A clever suggestion from visiting mate Brian was to use his gardening mesh to help get a straight edge on the insulation. Thick wire was bent in half to form 'pins' which hold the mesh in place, while the ends of the mesh are bent on the inside and outside of the insulation to grip it. 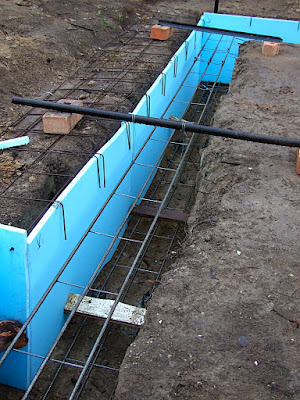 After marking the level that we wanted the concrete to pour to (see 'V' bottom left) we set up metal bars on bricks which were used to tie the upper layer of reinforcing steel in place, 50mm below the concrete level. These were lifted out before the pour, and put back in place when the pour was complete. 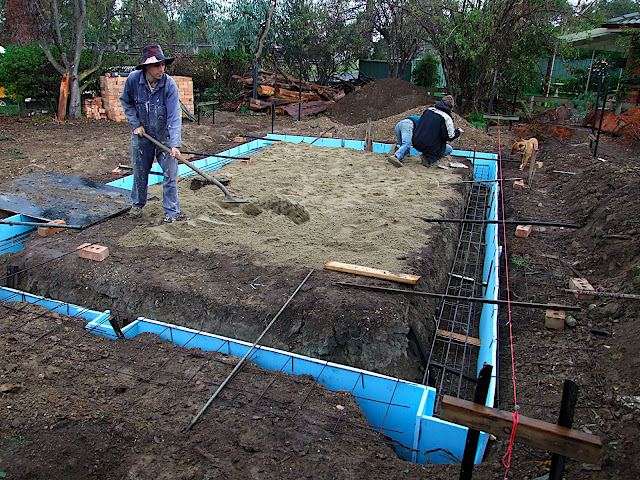 After months of no rain, it rained, turning clay into sticky mud. Sand, which will be used as fill to raise the slab, is used here to create a safer working space. 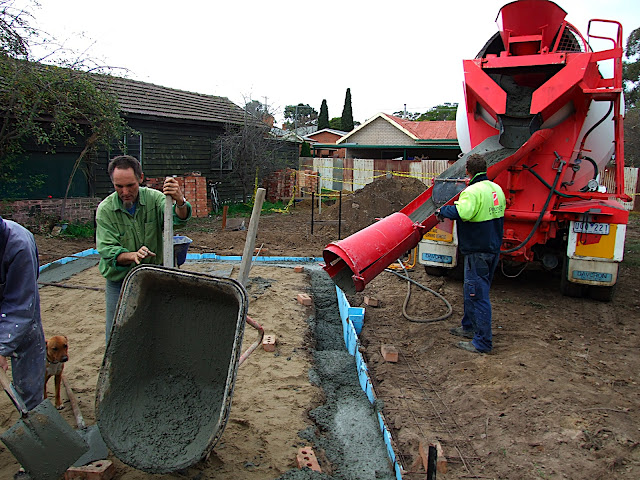 We ordered 4.6 cubic metres of concrete for both jobs, requiring a rather large truck to negotiate the small site. Wheelbarrows were used to move the concrete into place. 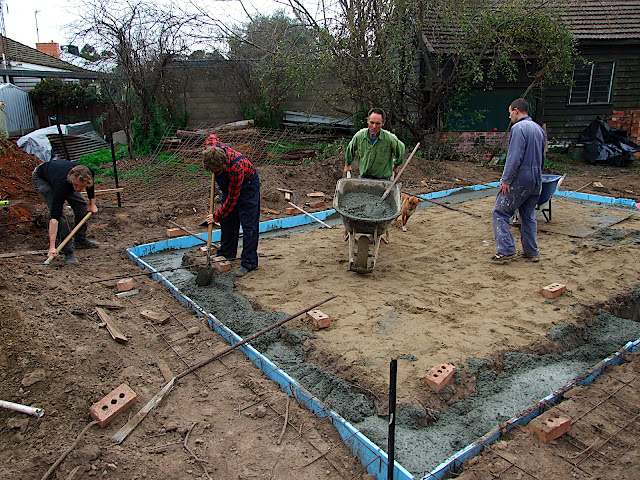 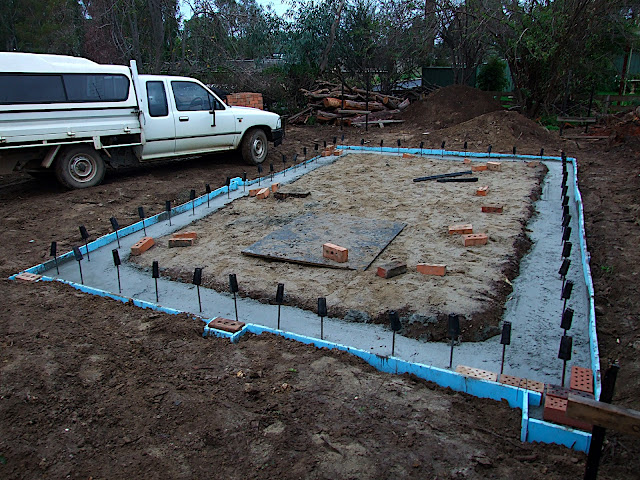 The finished insulated footing, with steel rods inserted into the concrete, in preparation for the next stage. Plant tubes on rods to reduce the risk of injury.