In the low energy future that we face we will need to be able to store food in cool places without using the huge quantities of energy that freezers and fridges currently consume. I was inspired by the cool cupboard design that David Holmgren and Su Dennet used at 'Mellidora'. The idea is that cool air is drawn from a cool space (in their case, under the house), up through a cupboard and out a metal flue pipe in the ceiling. Fruit, most vegetables, cheese, butter and eggs can be stored in the cool cupboard for reasonable lengths of time at temperatures of around 10-15 degrees centigrade. While it does not replace the job of a fridge, it does reduce the need for a large fridge, reducing electricity consumption considerably.

The cellar will be used to store preserved and bulk foods, where more room is needed. The idea of integrating the cellar and cool cupboard makes sense to me, drawing cool air from a cool space - but comes at a price. Warm air will be drawn into the cellar constantly. After much discussion I believe that this will not have a big effect on the effectiveness of the cellar, as the space is surrounded by cool thermal mass which will help to regulate the temperature.

The cellar will sit about 1350mm underground, the roof of the cellar will be 1m above ground level and a 5000 litre watertank will sit on top. This will give a small head for the water (allowing gravity feed) and provide thermal mass above the cellar. I am considering siting a header tank for the house on a stand above the cellar/water tank. 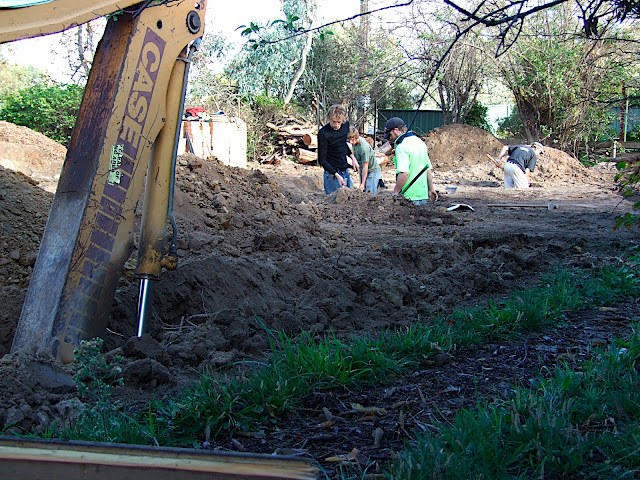 While the footings were being cleaned up I got Dave to work on the excavations for the cool duct. Peter worked out where the duct needed to come up in the future kitchen. We started there, with a depth of about 600mm and ran back down to where the cellar is to be located at a depth of 1500mm. 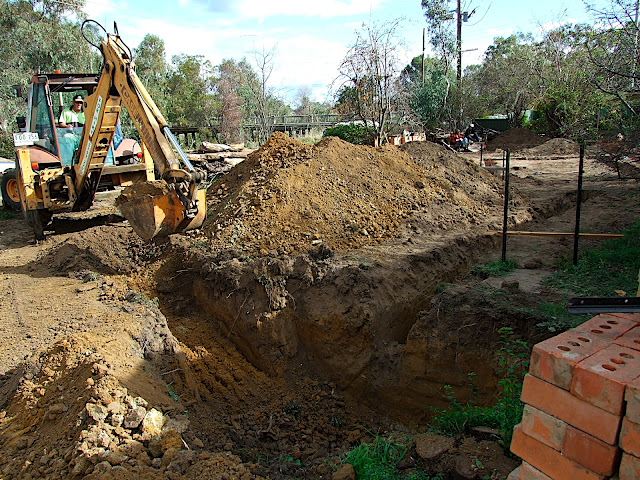 Dave used a 600mm wide bucket for the cellar excavation, which required a lot more fill to be removed. The ramp leading down will become a stairway. 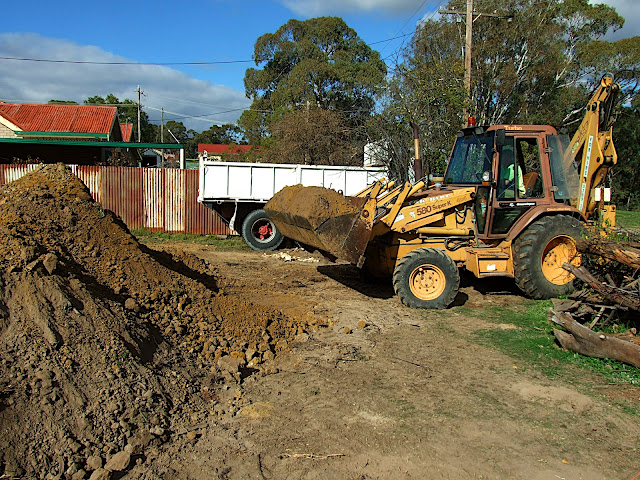 Although it was the plan to keep all materials on site, there was far too much fill from the excavations than I could use on the small site. A local truck driver was contacted who arrived soon after. He took two loads of fill where it was needed around the corner at a cost of A$120. All up (Bobcat & excavator) the earthworks cost A$592. 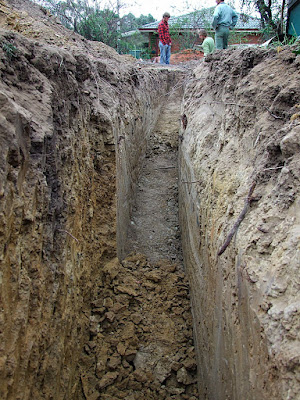 After Dave left the site we realised that the trench for the cool duct needed to be 500mm, not 400mm. While the duct itself is 400mm wide, we need some extra space either side for screenings to sit, extending the life of the duct by allowing water to drain around it. This required some hard work with a pick and shovel. 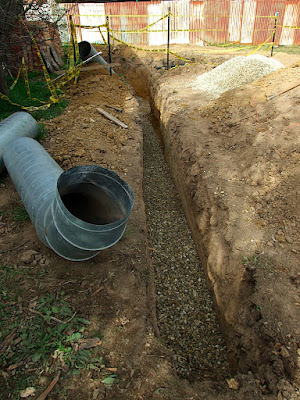 A 50mm layer of 20mm screenings was laid down (Two cubic metres of screenings cost A$100 delivered). 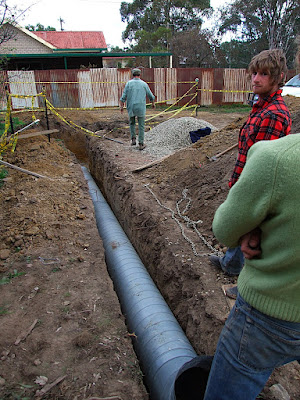 Next, the ducting was fixed together with pop rivets - two 4m lengths and a corner piece. The duct was then lowered into place. 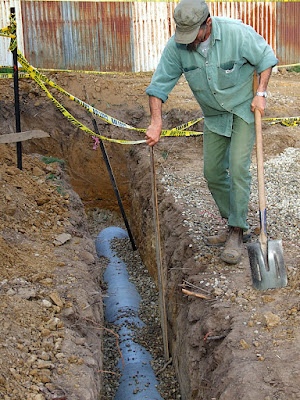 Screenings were then scattered around the edge of the ducting. Levers were used to ensure that the duct stayed centred. 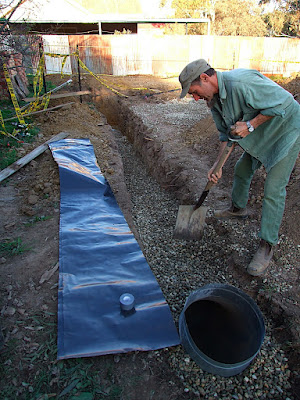 About 50mm of screenings covers the duct before a strip of builders plastic is laid in place. This will divert any water to the sides of the trench. 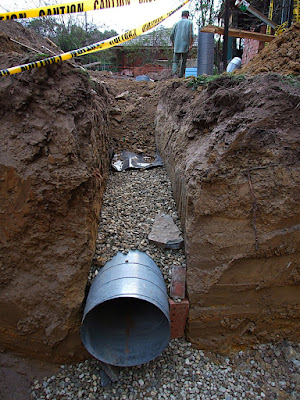 The fill is replaced over the plastic, and the duct is fixed into place. The air inlet for the cool cupboard will be within the cellar at a depth of 1400mm at the lowest point. 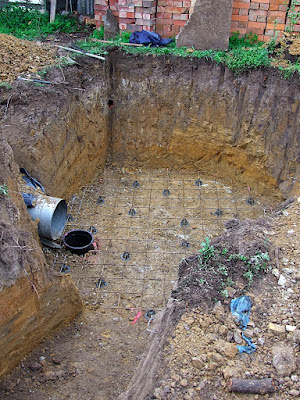 A sump (black plastic bucket) is placed at the base of the duct to collect any small amount of water that may run into the cellar. Reinforcing mesh is placed on 'seats' to lift it off the ground, ready for the concrete pour. 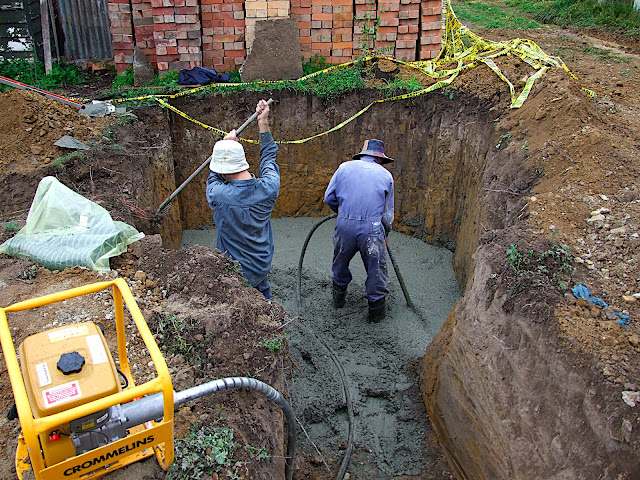 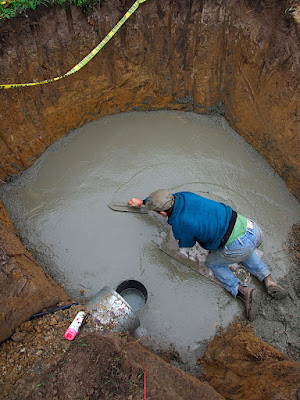 Peter screeds the slab after letting it dry for a couple of hours using a trowel. He uses a piece of cement sheet to kneel on to spread his weight.

Just one query. I'm wondering why you went with such a large diamater pipe. It seems to me that the large volume of air that passes through has less contact with the earth than it would if a few smaller pipes were used. Similarly, the air in the screenings will act as an insulating layer, further reducing the cooling effect of the earth on the air.
November 1, 2009 at 2:14 PM

Richard said…
A large diameter pipe allows for less restrictive flow of air than smaller pipes. The thermosyphon effect is quite weak so constriction of air flow must be avoided. David Holmgren suggests that a 300mm inlet and outlet vent with no sharp bends would be effective (see Melliodora eBook). The reason I used a 400mmm pipe was partly because I spotted it on the side of the road as I was passing a farm. I have been told that a larger diameter pipe would be more effective - time will tell...

Being about 1m underground, the air would remain at a relatively constant temperature. The amount of air being drawn through the cool cupboard can be controled at the base of the exhaust pipe or by using damp hessian screens over the intake pipe which would increase the effect of evaporative cooling.

If air is drawn through the system too quickly then it wont have time to cool properly. If it's drawn too slowly then the cooling effect wont be effective. It will take some tinkering to see what is most effective.

Drawing air quickly might be a good option in winter when air temperature is cooler than ground temperature.