Getting the run-off to run-in

- October 12, 2009
Principle 1: Observe and Interact
Principle 11: Use edges and value the marginal

I love watching water flow after big rains. Water flow indicates the topography of the landscape, showing high and low points of a site that may not be obvious during the dry.

The laneway to the east of the housesite collects a lot of water from backyard sheds and driveways which runs down wheel rutts into the stormwater drain. The water pools before it overflows into the drain, which has resulted in a muddy mess where cars can get stuck. I've been thinking about making use of the laneway entrance for the driveway to the carport, in which case I need to address the waterlogging issue. 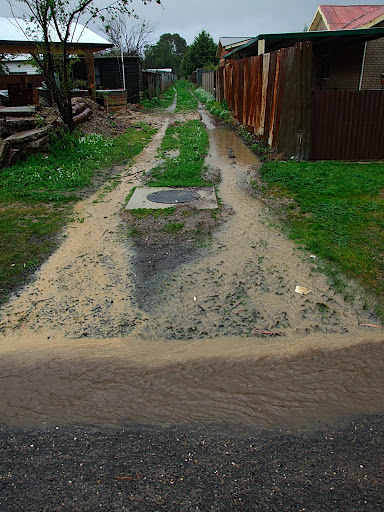 I've also been thinking about how I can make use of water as a resource... when I stumbled across a book by Brad Lancaster called "Rainwater Harvesting for Drylands and Beyond" which inspired me to act. Below are a couple of illustrations with captions from his website harvestingrainwater.com

The wasteful path to scarcity. The site rapidly dehydrates itself by erosively draining rainwater and runoff away to flood downslope areas and contaminate surface water with sediment. Greywater is lost to the sewer. Costly municipal or well water is pumped in to replace the free water that was drained away. Leaf drop/mulch is also drained away further depleting fertility and water-holding capacity. This leads to a depletion of resources and feeling scared in the city due to the resulting scarcity.

The stewardship path to abundance. This site passively hydrates itself by harvesting and infiltrating rainwater, runoff, and greywater on site, reducing downslope flooding and overall water consumption and contamination. The need to pump in water is greatly reduced or eliminated. Leaf drop/mulch is also harvested and cycled back into the soil and plants further increasing fertility and water-holding capacity. This leads to an enhancement of resources and a bun dance of celebration due to the resulting abundance.


I had planned to get the 'Kanga' back to dig a trench for the underground power cable and figured that I should do some landscaping at the same time. The idea was to use the excess sub-soil that was left over from previous earthworks to create an earth-berm which would hold excess run-off and allow it to absorb into the soil. A small channel will pick up water from the laneway and feed it into the soak.

Top soil was put aside (see top right of picture below) and used to cover the sub soil, making it easier for plants to grow in the future. Red Gum mulch (centre of picture) will be used to cover the earth berm near the right of the picture, but kept away from the edge of the house as it could attract termites. The berm to the left of the picture will become a raised path and prevent water from running under the house. When the area fills with water it will overflow out the old driveway and into the stormwater drain.

It is hoped that the area will act like a mini wetland, attracting small native animals like lizards, forgs and birds which will help control insects and create a beautiful living space. 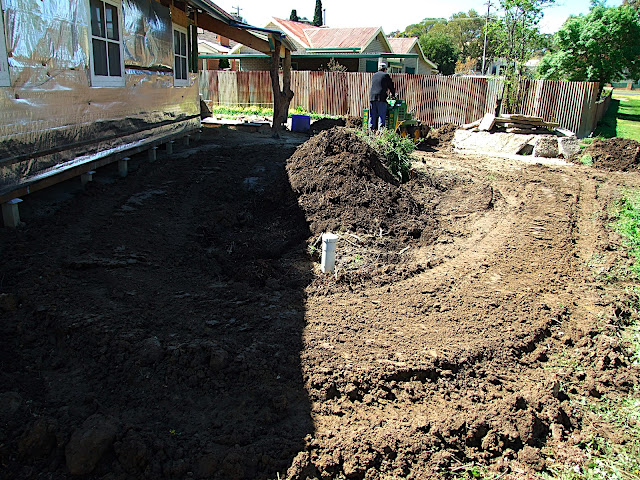 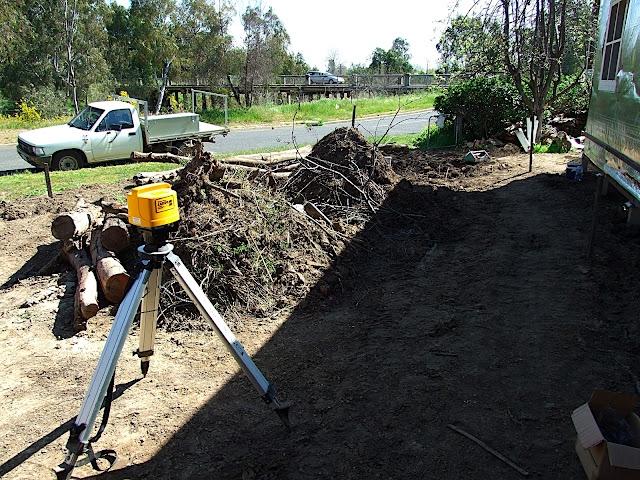 Using a laser level to ensure that earth berm is level and that overflow runs towards stormwater drain, not under the house (you don't need to use a laser level - I just had access to one) 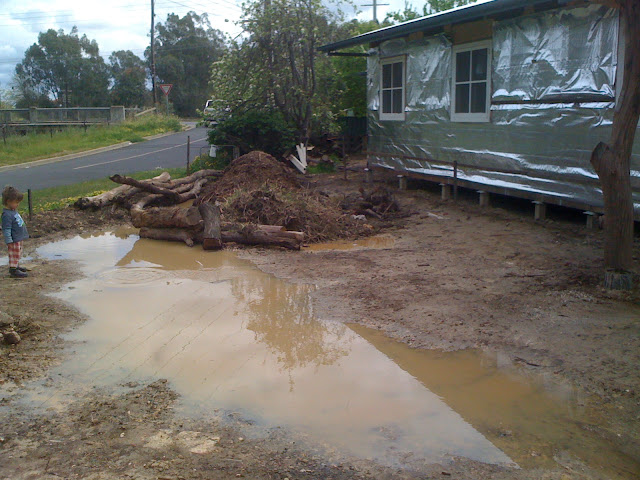 Captured run-off after heavy rain, water soaking into the ground after a few days 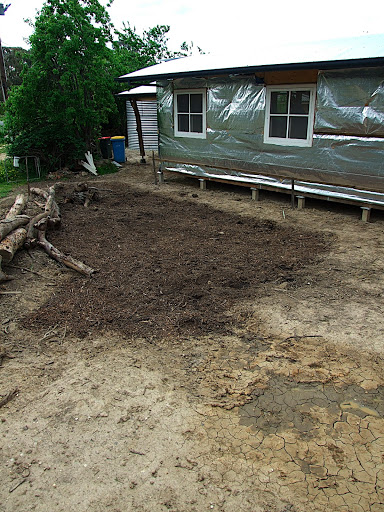 Filtration basin in front yard leveled out and covered with redgum mulch. Water runs in from bottom right of image and overflows at bottom left of image. Note: it is recommended to have the basin 3m from the foundations which I have not done - I may need to modify the design.