The permit process certainly slows things down - and the principle of Apply self regulation and accept feedback is all about that.

Initially we were told by our local council that a planning permit would not be required, as we were working with an existing dwelling. When we finally got all of the material together for the building permit, we were told that we needed to get a planning permit - which was annoying and expensive. Planning permit applications can take a long time, but after stressing our case, we got the permit in record time - one week. How council earns the A$476 for that piece of paper I do not know, there seem to be hands reaching out from all directions taking your money at this stage in the process and you don't really seem to get anything back for it - nothing tangible anyway.

Time pressure has been on, as the state and federal government grant offers run out at the end of June. In order to be eligible for the first home owner grants the foundations need to be in before then. A few days ago I found out that the Victorian State Government has just announced an increase to the grant from $15,000 to $22,500 for new homes in regional areas (foundations laid after July 1st). It is still not known what the federal government is offering after July 1st; this will be announced in the budget next week*. The Federal Government is currently offering $21,000 for new home built in a regional area (before June 30th). If the Federal grant is anything more than $6500 from July 1st (which I assume it will be), then I'm in no rush to get the foundations in. If it's less then I will be trying to get them in before June 30th.

*Update - The Federal Government is continuing the grant in its current form for another 3 months, so from what I understand, and what I have been told by the SRO I should be able to get $43,500 after I get the certificate of occupancy. The time pressure is now off, as foundation work needs to be completed after Juy 1st. I also need to return the original grant of $10,000 that I received which I haven't qualified for, as it has not been my place of primary residence, and will not be within 12 months of purchase.

I went to our local credit union to find out about getting a loan some time back. What I'm after is a construction loan. My understanding of this loan at this point is that you agree to borrow a set amount, in my case $100,000, and have access to that money as you need it. You only pay interest on the amount that you have withdrawn, not the whole loan amount ($100,000). Also, you can pay the loan out early without incurring extra fees.

What I like about dealing with a local credit union, rather than an online loan through a larger credit union is that you can deal with a real person and support a local business in the process. I haven't wanted to deal with the banks at all, as I haven't found one yet that I would like to - because when you do business with anyone, you are supporting them. I try only to support businesses that support my values.

As with any loan, a mountain of paperwork was required about your income and investments. Part of the application process requires that the property be valued by an independent assessor. The assessor valued the property lower than council, and made the recommendation to the credit union that funds not be made available until a planning permit had been approved. The only other thing that I have been asked to do so far is reduce the limit on my credit card - so that my application can "fit between the goal posts" as the branch manager said. We go into the credit union next week to open an account and commence preparation of the mortgage documentation. Seems like all things are "go" there.

All up, it looks like costing A$5452* to get development approval from council, including design work. The cost of getting the permits is pretty big with lots of hurdles and toing and froing with council. Very important to cross the 't's and dot the 'i's. I got a very good deal on the design work, as Peter - the architect / builder - is a good friend and very supportive of the project. See price breakdown below:

- Design & Building plans submission: A$1840
- Fire Risk Assessment: Included in plan submission fee above
- Property Title (searched within last 90 days): A$20.35
- Energy Rating: A$180
- Application for Setback Variation, to allow for maximising solar gain: A$211.15
- Soil investigation report: A$345
- Engineers drawings for foundations: A$814
- Survey Mark to assess AHD and ensure that floor level is 300mm above 100 year ARI (Average Recurrence Interval) flood event: Quoted $50, *charged $500 (querying that one)
- Certificate of Consent (an individual's written approval to act as an owner-builder on their own land in the State of Victoria): A$79.15
- Planning Permit: A$476
- Building permit: A$1486.65 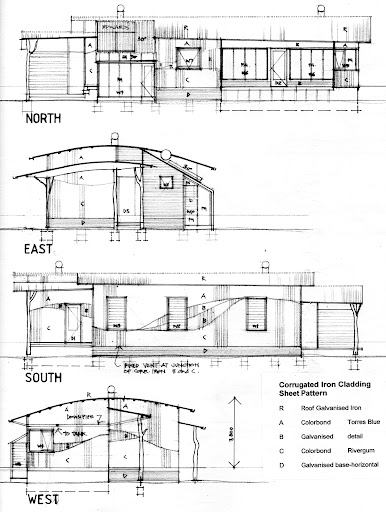 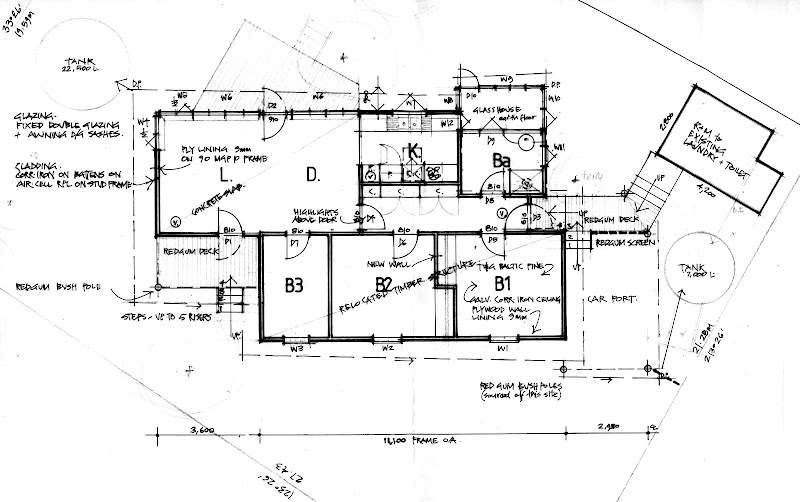 Gina Bisaillon said…
I hate that kind of bureaucracy because it automatically excludes poor people. Who can afford all those non-useful expenses?

Another way to exclude poor folks, and those on old-age pension like myself, is an income tax rebate that the Canadian government is offering for home renovation right now.

Our Conservative government loves to reduce taxes. But tax rebates only benefit those who pay income tax. With my low income, I pay no income tax, therefore I can't take advantage of this program.
May 13, 2009 at 4:19 AM

Alena Russell said…
mate it is so great to find your blog, I'm a building studies student and also studying sustainability/permaculture. would love to chat to you, though I'm sure you're busy. please get in touch. and all the very best to you. cheers, alena
June 1, 2009 at 6:17 AM