A chip off the old block

I remember when my dad used to work on building sites with my uncle when I was very young, I remember walking around half finished buildings and thinking of how fun it was to walk through walls. An so it is, all these years later that it's me working up a sweat. I brought my 16 month old son over to help me sort bricks, but he didn't last long. This job is best done alone, like a meditiation.

David Holmgren said of the principle 'obtain a yeild' that it's difficult to know if the reward from a job is worth the effort, sometimes you need to do the sums to find out. So I've been doing some sums.

I'd usually only spend an hour and a half or so at a time working on the bricks. It's been very hot here recently, 30 - 40 degrees, so I've been working in the mornings or late afternoons. I got into the swing of things and worked out a bit of a system - pulling a stack of bricks out of the rubble, then chip the mortar away with the hammer and stack them into piles of 20. I timed my work one day and cleaned 220 brick in 96 minutes. That's about 2.3 bricks per minute and at 57 cents per brick, that's nearly $80 per hour (tax free).

Over 12 days I cleaned 1600 bricks, which took about 12 hours. About $900 worth. I also did 5 trips into town to deliver them (sometimes to do other things as well), each taking 90 minutes one way. So all up I spent about 20 hours to get the second-hand bricks cleaned and delivered to the building project in town. 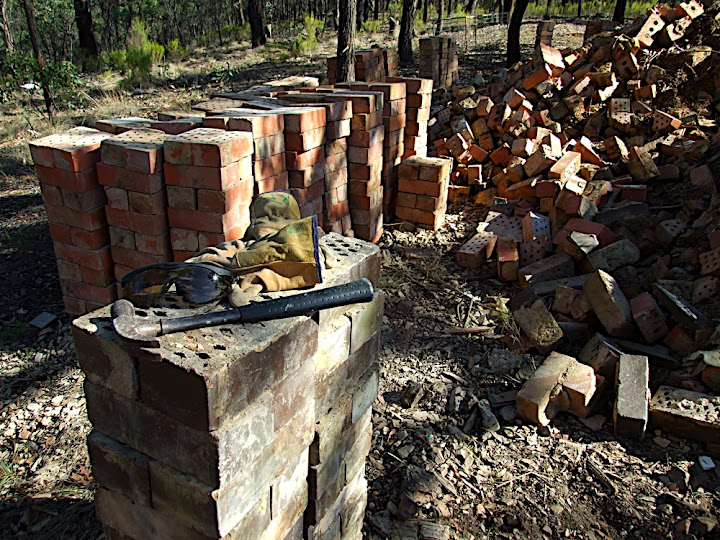 Using a hammer, protective eye-wear and gloves I cleaned 1600 bricks in about 12 hours over 2 weeks 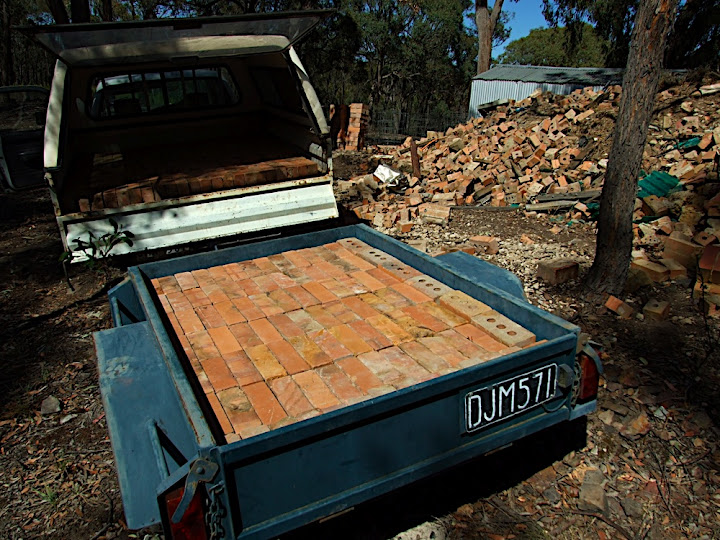 I could load up about 370 bricks at a time, in the trailer and the back of the ute (pick-up). 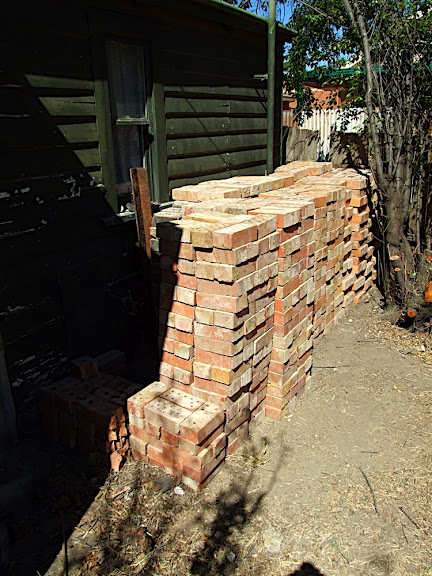 I took me about 90 minutes to load, deliver and unload 370 bricks.
In this pile there are about 1600 which I did in five loads.
Unfortunately for me, my neighbour's house finally sold, and so I no longer have access to the pile until we find out if it's okay with the new owners. It reminds me of that proverb again "make hay while the sun shines". I'm glad that I did get stuck into it while I had the chance. I should have enough to build the things I had in mind, but I would like to get some more if they become available.