10 weeks without a van, and counting


The story of Tang

I've become quite attached to my Kombi. I bought it in back in 1995 when I decided to head off for an adventure around Australia. I spent about 5 years living on wheels and 'Tang' and I became close friends. We've had our good and bad times, but mostly good. We also know each other intimately.

About 10 weeks ago I suspected that something was seriously wrong with Tang. The gears were playing up. My VW specialist mechanic in Pylong, about 35km away, is usually busy. So it was a 3 week wait before he would even look at the van. I've learn't not to push Trevor too hard over the years, just give him the time he needs to get things done. A friend told me a story about her putting the pressure on him and getting her Kombi (unrepaired) on the back of a tow truck.

Trevor took the gearbox out, and from what I can tell it was sitting around in the workshop for a while before he opened it up. Things didn't look good, so the hunt was on for another 2lt gearbox. Trevor told me that these are pretty rare as the racing 'super-bugs' use them up. After a bit of a search Trevor told me that I'd be better off settling for a 2nd hand 1800cc gearbox - you'll hardly notice the difference, he said. He found one and ordered it in. He headed off on holidays, his first in 14 years he tells me. The gearbox had not arrived in time for him to fit it. So another 2 weeks wait.

So that's the most recent story of Tang, and she's still away. It's been interesting in that we haven't really missed having a car very much - except for a few occasions, like picking Kai up from school in Tallarook.


How have we managed?

My biggest concern about sending Kai to Tallarook PS part-time was the distance. The station is about a 1km walk and we can catch the train in the morning. There's a 7 minute wait until the return trip, which is tight. Pick-up is another story, normally a 1.5-2 hour wait, which is when I like to use the van. Kai only goes to school one day a week and he's had after school dance classes last term that has worked out well with the train - a 40 minute turn around. Plenty of time to walk to the school and back to the station.

Living about 1km from the stupermakets has been a big plus - far enough away not to be too convenient. We walked (or rode) there if we needed anything, even when we had the van. Using either a pram, a two wheeled shopping trolley or backpack - depending on the mission. As we grow the vast majority of our fresh produce we don't need much from the shops. We get our goat milk delivered once a week and freeze it, returning the bottles for refilling. We make our own beer, bread, soda water, preserved fruit, cordial, yogurt and condiments - so there isn't many heavy items to purchase. I'd say we'd spend less than $50 a week at the stupermarket, and getting lower each year.

I work from home, I've been developing the Permaculture Principles website and online store where I sell permaculture products that I've helped develop - including my own publishing venture, the Permaculture Calendar. Kunie or I need to post items 2-3 times per week which is mostly done via the nearby postbox or post office which is about 1km away.

Kunie, the very keenest of knitters, is looking to sell some of her creations online in the future too to generate some funds. Shes been making quite a name for herself, winning the 13th Annual Artisan Books Beanie exhibition for most creative sculptural beanie "King Eat-well."She has recently sold items at the Alice Springs Beanie Festival and Geelong Scarf festival.

Adventures beyond Seymour have mostly been by train to Melbourne, but we've organised lifts when required. We haven't missed out on anything that we've wanted to do yet.


Reducing our dependence on fossil fuels

While I don't plan on getting rid of Tang upon her return, what I've observed is how we don't need the van. It's really a luxury for us, which I plan to use more for getting away - go camping with the kids etc.

We've recently swapped our gas stove for an induction cooker, which allows us to use the solar energy that we generate to cook our food - this along with our wood stove that we use during winter.
We still use some gas, but now only use the smaller 9kg bottles for the BBQ. We will probably use a gas ring in the kitchen too, which would be much better than the induction cooker at certain things like using the wok, or simmering. 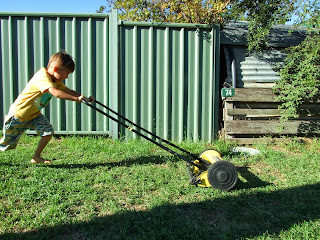 We use a hand mower to mow the nature strip and laneway, along with a wipper-snipper for the edges.

As I reduce my dependence on fossil-fuels I become more aware of their use. When I woke up yesterday I heard the birds below the buzz of a ride on lawn mower and cars driving past.

I think that it's important to demonstrate that it's possible to live a rewarding and fun filled life while living lightly on the earth.

UPDATE: Tang is back in action, 14 weeks off the road in all. I haven't been using her much though...
Creatively use and respond to change Fossil Fuel Knitting principle 12 Tang

Pavel - Desirable World said…
"Creatively use and respond to change" has been a guiding principle I have followed for many years. Especially when it comes to transportation. You see, I have never driven - I have never even gone for my learners permit. I like it that way.

People ask me all the time "But how can you do this?" or "How can you do that?" Creativity is the key. I guess I am not responding to change as such as my life has always had this limitation on it but I do get confronted by new situations all the time that need to be responded to. I moved house recently. What to do? I bartered with my brother-in-law. He helped me move, I gave him a slab of beer. (The Great Australian Trade - beer in exchange for service.) I live further away from the Central Markets now, where I do my grocery shopping. No longer can I walk home with my shopping. I catch the tram or cycle. I have become more interested in camping in the bush. I only travel to destinations that are reachable by coach. And so on.

I think motor cars can lead to a sense of apparently inalienable independence. I think this frame of mind leads to more value being put on destinations rather than journeys. It's amazing what you see when you're not driving a car, eyes fixed on the road, at 110km/h.
September 28, 2013 at 11:21 PM

Anonymous said…
We recently had the unenviable task of choosing a new car when the timing belt went in the old one. We have 3 kids, all in booster seats so we had restrictions on anchor points and my husband desired a 4x4 as we currently collect our own wood from the forest for the wood stove. No matter how I looked at it we continued to need a car. We either have to pay to have wood delivered or source it ourselves. Either way, fossil fuels are involved. One day I would like more land, enough to grow more of our own wood but until that day. Still, we could reduce our use of Samson (our Delica) and hop on the bikes to pop out to the shops.
September 30, 2013 at 2:06 PM