- December 28, 2012
Principle 5: Use and value renewable resources and services

The local campaign to support the proposed Cherry Tree Wind Farm has taken a step forward with the publishing and distribution of this flier that I put together with the help of Leigh Ewbank from Friends of the Earth and the team at BEAM. There will be a letterbox drop in the local area and the flier will also be distributed throughout the region.

The flier has been put together in response to the misinformation that is being regurgitated by local anti-wind groups. One of the latestet claims of which is that Wind Farms should not be placed in high risk fire areas as they can start fires. This comes after news of a grass fire near the turbine site a couple of weeks ago, which (from what I've heard) was caused by a lightening strike to a tree.

On investigation further I discovered that lightening strike is the main cause of bush fires. The Wind Energy Fact sheet produced by the NSW state government concludes that fire risk at wind farms is very low:


Wind farms can be struck by lightning, just like tall buildings, but they are equipped with comprehensive lightning protection systems that transfer high voltages and currents safely to the ground.
The fire risk is very low. The flammable parts are located high above the ground, away from vegetation and high voltage connections are underground.

Lightening would in fact be more likely to strike a turbine than a tree, reducing the risk of lightening causing a fire nearby. 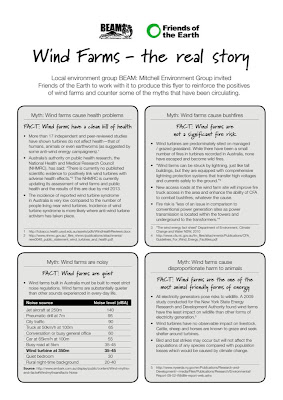 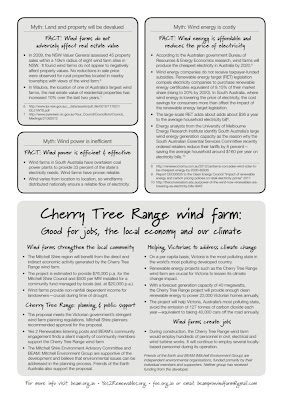 Linda said…
Hi Richard, just a courtesy comment to let you know I've linked through to this post. Well done with the flyer! Cheers!
January 4, 2013 at 3:11 AM