A couple of months ago I read an article by Michael Green in The Age. It spoke of a new target of 5kWh per person per day, the "Go 5" campaign. I was horrified. We used less than half that amount of electricity for a family of four!
In the article there was a link where you could find out how much energy was typically used by a household in the same area with the same number of residents. For our household it was 18.1 kWh per day on average over a year. That's less than the target! What's the point of setting such a target if most of us have already made it?
I wrote to Michael Green of my concerns and he replied with this:


The idea is that we can bring down overall consumption by establishing a norm that's slightly less than the mean (more like the median), by shifting the really high consumers. Still, it seems such an unambitious goal...

Michael checked out this blog and was interested in writing about our project. He interviewed me over the phone for about an hour and wrote the article below which was published in The Age on the 4th of November 2012. You can see the article with links on Michael's website. 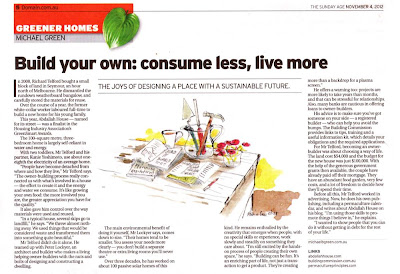 It was great to have a well written article about our project, in such a high profile newspaper. The traffic on the blog has gone through the roof since it was published. I wonder if something else will come of it?
Creatively use and respond to change energy principle 12 publicity

Alicia said…
I saw this in the paper, it was a great article! Nice to see these ideas creeping into mainstream media. Our family of 4 uses 5kWh per day, and we've had 2kW of solar for 2 years, and are waaaaay in credit.
November 7, 2012 at 11:59 AM