One of the philosophies that I have embraced in the building is to expose the materials that are being used. Concrete, which can be quite an ugly product, can be cut back and 'polished' to expose the aggregate that lies within it. It's a beautiful finish that means that the insulated slab floor can be left uncovered to do its job of catching and storing the sun's energy... or the cool of the earth during the hottest months.
I did the first roguh cut of the concrete floor grinding myself, using a hired machine. The final cut was done by the pro's. A mob called Smoothstone from Shepparton.
An industrial vacuum attachment was fixed to the grinder to remove the dust, rather than using water like I did, which would have been very messy. Edges and tricky bits were done with a small hand grinder, similar to an angle grinder. Small holes were filled with a black putty before grinding commenced and ended up looking like cut stones. The floor was given a final vacuum before painting began. 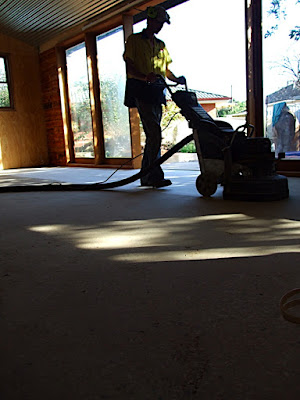 Fine floor grinding with vacuum attachment, taking out small scratches and stains.
A polyurethane high gloss paint called Tuff Coat for concrete was used. The edges were cut-in using a disposable paint brush, with the micro-fibre roller close behind. The first coat had a catalyst added to it to speed up the drying process. It took only one hour for the floor to be dry enough for second coat to be added. This meant that the guys could have the job done in half a day, instead of coming back down from Sheparton again (75km north) to finish it off.
The second coat had a satin additive included that give the floor a duller finish than the high gloss, which is difficult to keep clean (so I'm told). The floor was left to dry overnight before it could be walked on, but wouldn't be fully cured until 10 days later.
It's best not to wear shoes on the floor (as stones caught in the soles can sctach the surface), an electrotatic mop can be used to clean the floor and 3 monthly wipe with 5% metho and water will help protect it. A maintenance coat every few years is recommended. 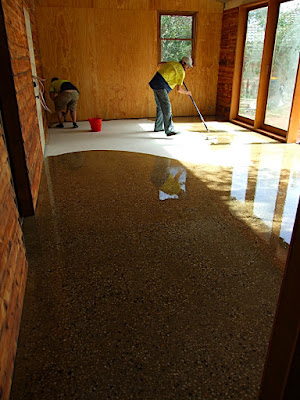 The first gloss coat soaks right in, binding to the concrete 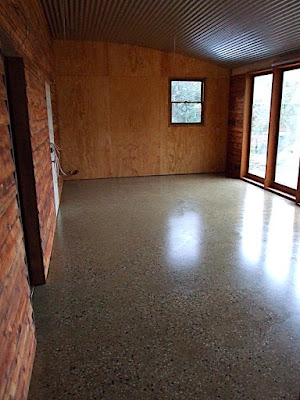