When I went to check out the second-hand water tank that I was looking to buy I came across a large window on the site.  It was made from Western Red Cedar, a soft timber that is naturally resistant to decay. The panes and doors were in good condion, but the supporting frame was not, as it had been stacked straight on the ground and left out in the weather for years. The glass was single glazed (probably laminated) and it had a double sliding doors. I thought that it might be useful as the northern window and asked a friend what I should offer for it. I offered A$300 and paid A$400. I thought it was a good deal - and it came with two sliding fly screen doors (Principle 3). It would cost about A$5000 or more new. 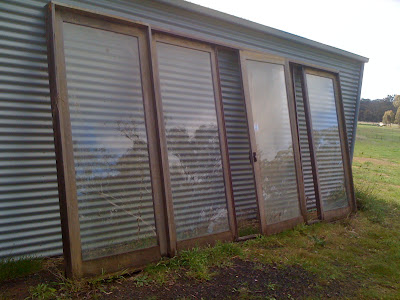 Second-hand windows I purchased for A$400

It took four guys to lift the thing and load it onto the tri-axle trailer. When we got it to the site we decided to separate the panels and make up a new frame. It was also much easier to handle and store in smaller sections. We stacked the panes on the concrete slab for several months before using them, helping to take out any twisting that may have occured.
One of the big worries I had about the windows was that they would not comply with the current building regulations. It either needs to be laminated or safety glass. If the glass doesn't comply then I can't get the Certificate of Occupancy that I need for the First Home Owners Grant. My mate Dylan (who is a glazier) had a look for me and noticed that the laminate was starting to come apart in a small section. The only other way to tell whether is was laminated or not is by removing the glass and looking for the join, which would be very difficult as the glass was siliconed in place. Be very careful when buying second-hand windows. Make sure they comply to standards before purchase, don't rely on luck like I did.
I sanded the frames and painted them with Sikkens Cetol HLS. This product was recommended to me by the window maufacturer who made the cedar kitchen window. What I liked about this product was that it has great UV resistence, repels water and can be recoated. On the down side, the chemical data sheet reveals that the product is quite hazardous. A more environmentally friendly solution would be BIO paints which are non toxic. Lesson: research before purchase pays off. 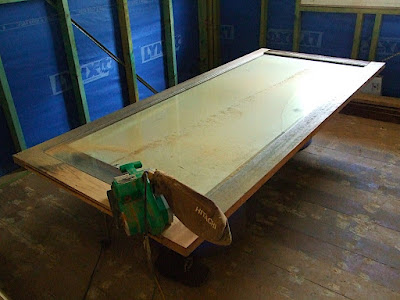 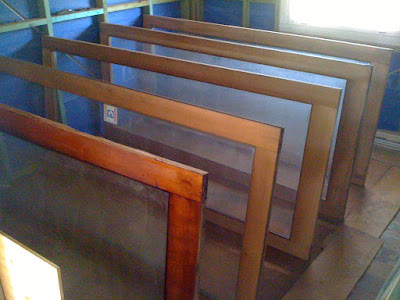 
One of the hold-ups on getting the framing inspection approval was that the building inspector wanted engineering approval for the framing of the northern window. The large opening on the north required a structural frame that could support the roof, hold the windows / doors in place and look good too. We decided to use locally sourced 190x45mm Mountain Ash timber for the job. The timber was sanded before we contructed the frame, which is much easier to do then when it is assembled.
The engineering drawings specified that we use hoop iron to tie down the roof beam to the window frame. We decided to make up some bolts to do the same job that could be hidden, rather than exposed. The bolts were made up from all-thread which was flattened at one end with holes drilled through it. Holes were drilled through the frame and a recess made for the bolts. The bolts were fixed at the top with nuts / washers and screwed into the frame below. The frame was fixed to the concrete slab using masonry anchors. This passed the framing inspection.
Once the frame was in place it was stained with one coat before the windows were cut to size and installed. The sliding doors were fixed into place temporarily so that the house can be locked up. The sliding mechanism and flyscreen doors will be fitted later. 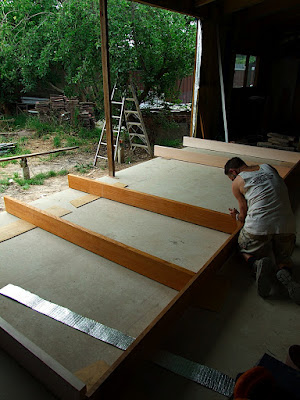 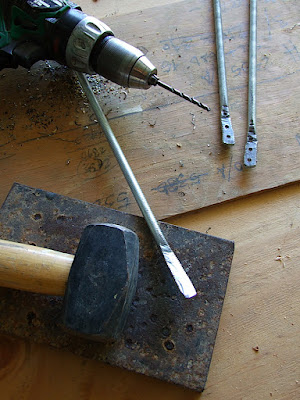 Bolts made up from all-thread and flattened at one end 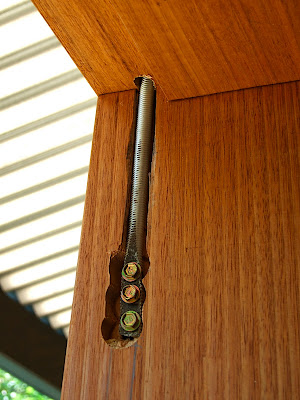 The modified bolts are fixed to the beam above with nuts and washers and screwed into the frame. The frame is fixed to the slab floor using masonry anchors. 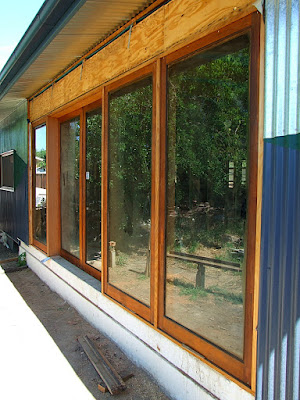 Windows cut to size and installed, covering the bolts

With the northern windows now roughed-in the passive solar design becomes much more effective. You can see in the picture above (taken at summer solstice) that the sun does not enter the building during the hottest time of the year. The insulated concrete slab captures and stores (principle 2) the cool temperature of the earth during the summer, and does the opposite in the cooler times of year as the sun heats the slab. One of the reasons that the windows are only single-glazed (not double glazed) is that I have decided to install heavy curtains with pelmets to reduce convection currents from altering the temperature inside. The curtains will have a reflective backing that reflect radiant heat out, and be thick enough to allow the control of light levels inside. This is something that double glazing cannot do.