Timber seems the obvious choice for framing the house in this location. A renewable resource with low embodied energy. While I intended to reuse the hardwood framing timber from the old house, there were a few things that we considered.

Problems of using seasoned hardwood for framing include:
- the need to pre-drill holes before fixing (to avoiding splitting), which is very time consuming
- it will often have twists and bends in it, which make it difficult to fix cladding onto later, and to get square

But there are benefits too:
- low embodied energy, bringing new life to an existing resource
- it shouldn't bend or twist any more, that's already happened
- more resistant to termite and borer attack than soft woods like pine
- more fire resistant than soft woods

Since I was intending on building a deck anyway, reusing the old framing timber for that purpose makes a lot of sense.

So what timber should I use? Treated plantation pine is the mainstream choice. The big things to consider are: what is it treated with? and where does it come from? Be careful not to buy timber treated with Chromated copper arsenate (CCA) - also branded as 'Tanalith'. It can be very harmful to the environment, especially after it is burnt. "A ticking time bomb". There are other wood preservatives available, I'm pretty sure that the pine I ended up getting was treated with 'Light organic solvent preservatives' (LOSP), which is not as bad - but not great either.

When I asked where the timber I was thinking of getting came from, I got a nasty surprise. Aparently it came from Russia, shipped down to Melbourne, then up to Queensland for treatment, back down to Melbourne and then to Seymour. Not very sustainable. After asking if I could get something more local, my supplier found a company in Tumbarumba NSW (360km N.E. of Seymour) that could supply us. Much better, but again not ideal. While using plantation pine is much better than the indiscriminate logging of native forests, it does come with its draw backs. Monocultures are devoid of diversity (See Principle 10: Use and value diversity), sustainably managed native forestry are a much better solution for our timber needs than big scale monocultures.

Ideally, it would be best to use a suitable local green hardwood timber that is milled locally - unfortunately the Red Gum that was milled on site wasn't suitable for framing. When you build with green timber, letting it season after it's been used in framing, it helps to make the building even stronger as it shrinks together. Ensuring that the joints are rebated will reduce the amount of twisting that will happen. This is the way most houses were built in Australia, until relatively recently - when pine took over. Hardwoods are more naturally resistant to termite damage than softwoods, but physical barriers and regular maintenance will always be your first line of defence - regardless of what timber you use. 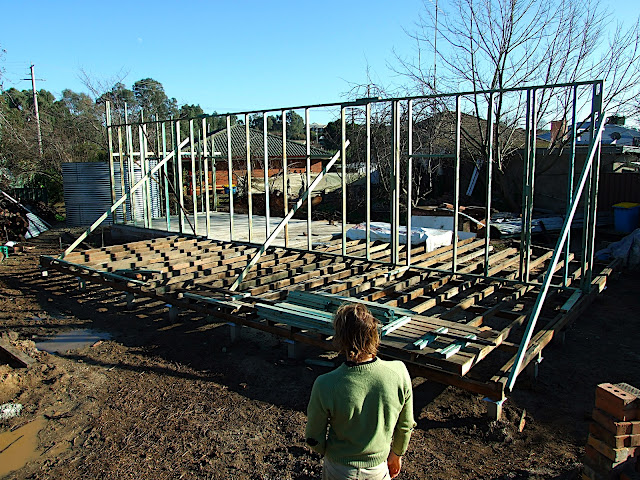 Quentin checking out our first day's work on the framing 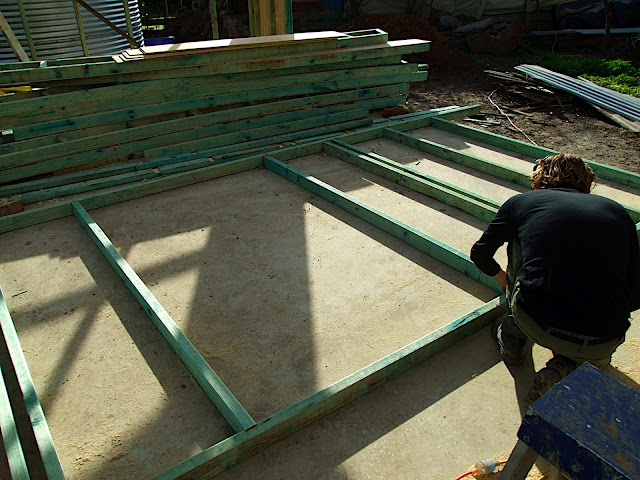 Quentin framing up on the slab, which makes a great work bench. The studs are rebated into the base and top plates to reduce twisting.

We decided on using curved box beams for the roof structure. Partly because I love curves, partly because Peter has built with them many times before and partly because they have less wind resistance - reducing fire risk. One of the things that I love about this building method is that both pine and corrugated iron can be sprung to around the same curvature before they give in. 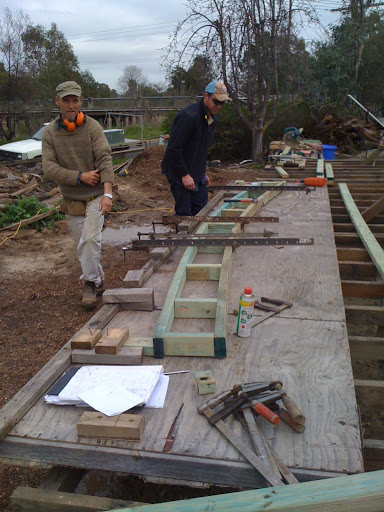 Peter and Andrew working on the first curved box beam. Clamps are used to bend the pine into the correct shape. 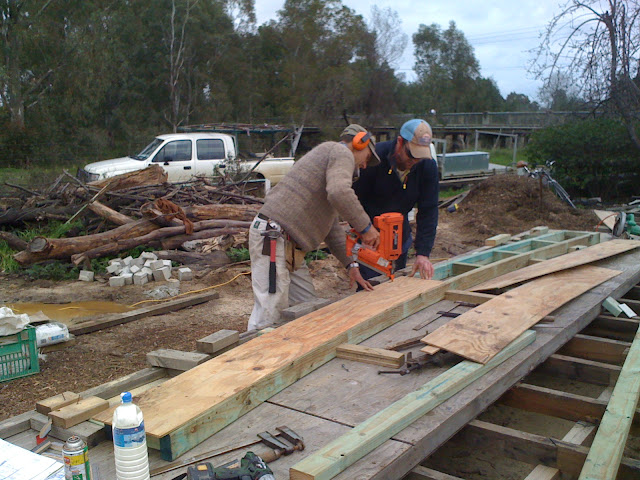 Plywood is cut to shape and fixed onto the curved timber using both wood glue (PVA), and 50mm nails spaced at 75mm. A nail gun is very handy for this, as a 4.5 metre spanned beam would have about 300 nails in it. 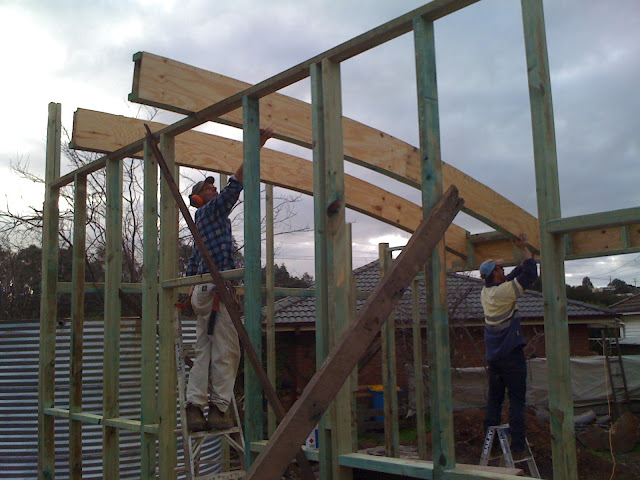 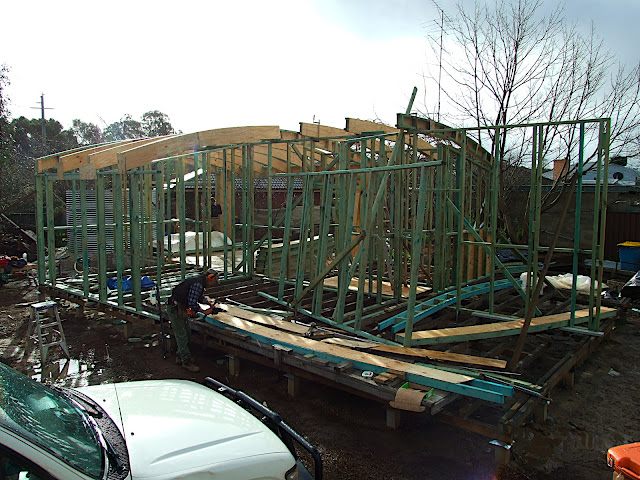 framing permaculture principle 5 Use and value renewable resources and services

Darren (Green Change) said…
Those curved beams look great! Nice and organic-looking, and they look pretty easy to build once you set up the jig.
August 24, 2009 at 3:59 PM

daltxguy said…
I'm surprised that you opted to use treated timber of any sort. I don't think treated timber belongs in a home. There are plenty of naturally resistant tree varieties that don't require treatment. What about plantation grown Douglas Fir?
October 1, 2009 at 10:36 PM

Richard said…
Of course natural termite resistant timbers are the preferred choice, but they are not always available at the time which they are needed - cost can also be prohibitive. As I mentioned in the pos,t treated pine is not ideal, perhaps with more research I could have found a better solution.
October 6, 2009 at 6:43 PM