Most people that I have spoken to have told me that I should get the house demolished, or even burn it down! But I see the existing buildings on the site as valuable resources. Lots of energy has gone into cutting the trees, milling the timber and transporting it, via middlemen (women?), to this house site. The timber sequesters carbon which, if burnt, would be released into the atmosphere. I'd rather use what I can of it, even though it takes my time and energy to prepare and store it, and keep the carbon locked up. Also, by reusing existing resources I place less demand on the production and transportation of new resources, and I don't have to pay for them.

When the Red Gum was felled there was a mountain of twigs and branches, along with the larger stuff. Fortunately I have a friend with an 8 horse power shredder who allowed me to borrow it so that I could turn the mountain into a molehill. 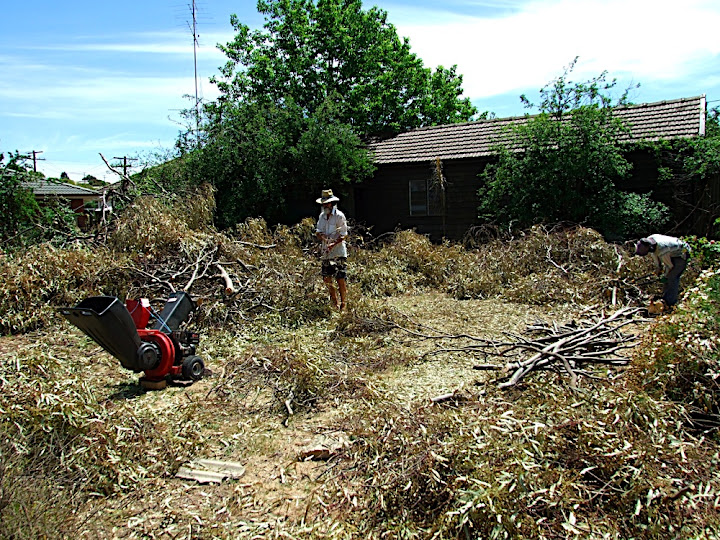 Shredding up the branches from the Red Gum that was felled on site
Add a Caption
The mission took 2 half days, with 2-3 people and consumed about 5 litres of fuel. The result was as a massive pile of small branches, and a pile of mulch. I was thinking after we finished the job, what would they have done in the 'olden days'? Burnt it, and in fact, that's often what is still done.

The original contractor that I got to quote on the job wanted to take the whole lot to the recycling depot - where they would shred it, and buy a load of mulch from them for the garden (which is apparently quite cheap). I have a few concerns with this; the excessive use of fossil fuels, the added $ cost (I have time, not much $) and I lose some great resources.

When I consider paying for services that I could do myself, I don't just think about the $ cost, but also how much work I would have to do to pay for that service. Say I paid someone to clear up the site for me for $1000. I would have to earn about twice that to pay for it, and use lots of resources in the process. Why? When I earn money I have to pay tax on that income, so I need to earn more. I have to cover the costs associated with earning that money, transport to work, food and drinks, buying stuff because I want to reward myself for doing work I don't enjoy... it all adds up. On top of that, it would take me a lot longer to earn $2000 than do the job. Instead I got a couple of friends to help me and got some exercise in the process (so I don't need to go to the gym). I also get another benefit from working with local friends: it helps build community - I'll make myself available to help them when they need it.

Now I have these resources, that I truly value because I had to work so much to create them, I need to think about the most productive way to utilise them. Some ideas are that the branches could be used to make a funky fence, or perhaps some bush furniture? They could always be used as firewood, but I'll try to find another use for them before it gets burnt. The mulch could be used on the garden (when I get around to making one) or maybe I'll use it in the composting loo? I'd like to retain as much of the Red Gum on site, where it came from. 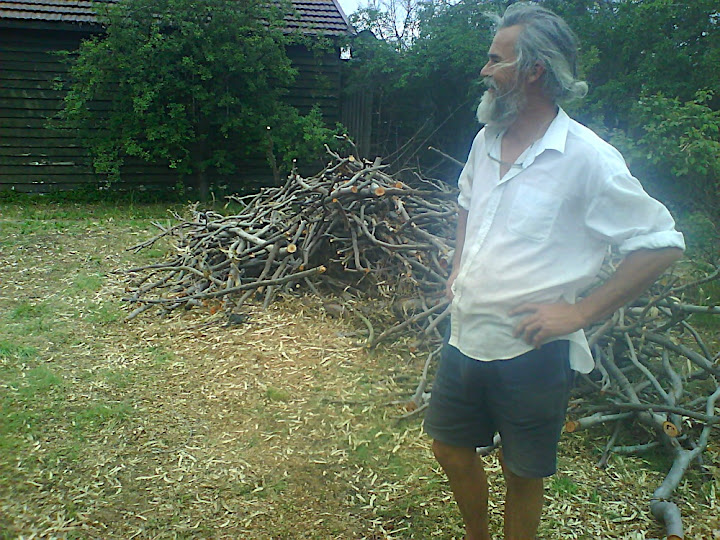 Job done! Brian (one of my helpers) looking over the cleared site with a pile of branches behind.
Add a Caption

McCabeandco said…
What!? You've got helpers :)
Does he drive a kombi? Kombi drivers are known to help each other...they like good coffee too :)
All the best there Richard!
December 4, 2008 at 3:20 AM