The house design begins, what about the $?

One of the things that has stopped me from buying a house in the past is the fact that I would have needed to get into a lot of debt. A lot of debt would mean that I would have to work hard in a job that earned a pretty good income. My background is in advertising - which can generate a reasonable income if you play the game - I find the work quite challenging, not because it's particularly difficult, but because I'm often put into situations where I am promoting 'stuff' that I don't believe in. I don't want to contribute to a world of more unnecessary stuff (see video below), and I've managed to avoid it for a bit over a year now. I'm managing to get by on doing odd jobs here and there and using my skills to promote what I do believe in. I see the 'stuff' that I am producing now as a bit more necessary...

I kept most of my hard earned savings in an Ethical Investment institution. I was glad that my money was supporting projects that I believed in, so my money was working for me in 2 ways - making the world a better place by helping ethical businesses prosper, and by increasing my savings. For many years the investment did really well... until the crash. I bought the house early on in the decline, about 10% below the markets peak, so I was fortunate to get out relatively unscathed.

I had been looking for an opportunity to use my savings, and the skills that I have developed over the years to put some of my ideas into practice. At the moment I am (relatively) young, skilled, able and have the enthusiasm to do something - who knows how long that will last? Then the house project came along...

When I first saw the property I thought 'hello, I might be able to afford that'. When nobody bid at the executors auction (deceased estate), I decided to make an offer. It was just about all the money that I had saved over the last 7 years, $50,000. I didn't expect to get it, as the land itself was valued as $72,000 and the reserve at the auction was $85,000, but the owners were keen to sell and counter offered with $55,000. We settled on $53,000. Part of the reason that I got it so cheap was that I wasn't attached to the outcome, and also, I didn't want to borrow money - I could only offer what I had access to.

How can I afford to do anything else on the house now that's I've spent all my money? It would have to be the worst house in town. But the location is pretty good, all things considered. Being a first home buyer I am eligible for the first home buyers grant. I received $10,000 from the government, which paid the stamp duty (taxes) and left some for beginning the project. Not long after that, the federal government raised the grant, and made $29,000 available to first home buyers who buy, or build, a new home in a rural location. I contacted the State Revenue Office and asked if I would be eligible for the new grant, if I decided to build, and they said 'YES'. The catch is that I would have to return the money that I had already received, and I would not have access to the new funding until after I got a 'cetificate of occupancy', meaning, the house would have to be completed. This is a bit of a problem. It means that I will have to find some money from somewhere.

Some banks offer special rates for first home buyers, but I found that they will not give 'owner-builders' these special rates, because to qualify for the rate you need to have received the first home buyers grant - which I can't get until after the house is finished. Hmm... also, If I borrow money from a bank I need to come up with regular payments to pay off the loan. How am I supposed to pay off a loan when I'm working on the house?

All of this is tailored to people who work a 'normal' 9-5 type job, who get paid and pay someone else to do the work for you. Not owner-builders. I don't see the point in earning money (paying tax), to pay somebody else (who pays tax) to do something that I would much rather do myself. I think what I need is to borrow $29,000 which I can then pay back when I get the house finished with the grant money. That should keep me going a while.

I met with Peter (the architect / builder) on site and we looked at the possiblity of moving the existing building to a new location, in order to make it solar passive, this would make the home more comfortable to live in and cheaper to run. Peter estimated that moving the house would cost $5,000. It was decided that it would be a better idea to dismantle the house and rebuild it in it's new location - on new stumps and higher, reducing the chance of the house being damaged in a flood. 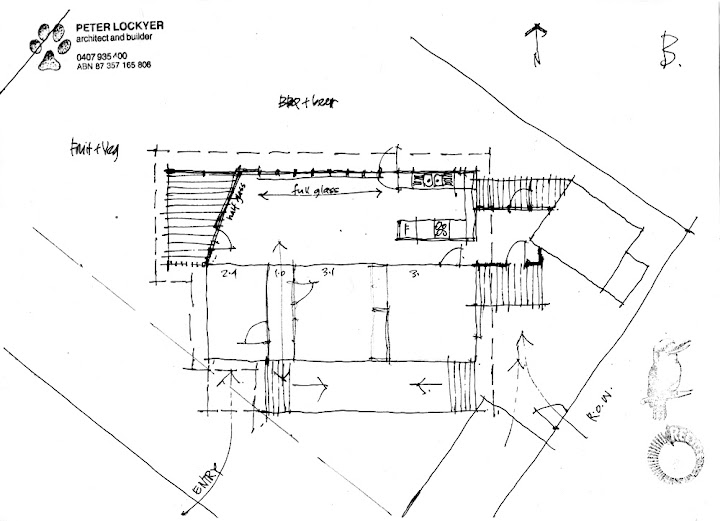 In his first sketch you can see the original house reorientated and set back towards the road. The north (top) of the house would be an extension on a slab floor with a walkway to the existing bathroom (which would be renovated).
Peter thinks that the project will cost around $100,000 to build as an owner builder - I was hoping around $50,000. With the grant, some money that my partner was willing to put in and earning some money on the way, $50,000 seems possible. $100k... hmm...

There are also some other grants that I am eligible for that I am thinking about:

Cecilia Macaulay (Tess) said…
Its interesting, to see your reasoning and thinking behind spending. These days I'm realizing that my inner budget for things is quite inflexible, and whats worse, rather arbitary. Its scary to experiment with, or even consider, paying much much more, or much much less for things. Those 'budgets' seem to define me, give me limits and freedoms, and are as much a part of me as a limb or organ. But I can actually change them. Then look forward to the surprises.
February 7, 2009 at 12:20 AM

I'm one for trying out different things, and I like to see what we can get away with before committing to something bigger and 'better'. Fridges and freezers are one of the biggest energy consumers in the household - usually behind heating / cooling and hot water systems.


We've trialed a number of fridge systems here before settling on the upright freezer conversion.
First we used an old 150lt bar fridge that used around 670Wh per dayThen we bought a 150lt chest freezer (using around 466Wh per day) for preserving bulk food - with the idea of a possible conversion.Our bar fridge died two weeks later so we used ice from our freezer to create a 'ice box bar fridge'We then tried a smaller old Engel fridge (about 50lt) that I had in the Kombi that used about 420Wh per day. After not being entirely satisfied with any of the above I finally decided to try out what I always wanted to and convert a freezer to a fridge. I…
Read more

I collected a large pile of concrete which had been sitting out the front for a number of years. It had become habitat for snails mainly. Originally the concrete blocks were footpaths from around the original house, so they hadn't traveled far. This material is more commonly known as 'urbanite', and is used in some pretty creative ways.
I've been thinking about creating a space for an outdoor kitchen for some time now, and figured that I really needed a paved area in between the shed and cellar to set it up. The urbanite seemed like the perfect answer, allowing me to clean up around the front and create a great space round the back.
My mate Dylan suggested that I make up a form and mortar mix to set the concrete block pieces onto. Seemed like a good idea to me, so after thinking about it for a few months and with summer just about to start, I decided to get stuck into it.

Apply self-regulation and accept feedback Almost 5 years to the day after I wrote the piece on the 'Super Fridge', it has been my most popular post by far. The fridge recently died, which was very disappointing, even though I knew that this was an experiment. I had optimistically anticipated that the super fridge may last longer than a similar quality normal fridge because it was under less load. I was wrong about that.

Thought it would be good to do a bit of a review on how it performed and what the learnings were from it. You can see the original post here - read over it now, if you haven't already.

I estimated that the daily energy use of the original 'super fridge' was 165Wh per day. This was based on settings of turning on at 3ºC and off at 7ºC. I changed that later to on at 2ºC and off at 5ºC, so the use could be assumed to be a bit higher than 165Wh p/d - but I didn't measure this.
The cheap Aldi freezer that we purchased in 2013 (AU$299) was not ideal. …
Read more